Situated between 1000 and 1300 meters and with more than 150 km of marked routes for all nordic activies, the Retord Plateau is a paradise for Nordic skiing. There are three access points to the Plateau for cross country skiers: Cuvéry, La Chapelle and Les Plans d'Hotonnes. The Plans d'Hotonnes also has an alpine ski area with 13 pistes, a biathlon stadium and beginners' area for cross country as well as hotels, ski hire and restaurants. Cuvéry also has hire and a beginners area. La Chapelle is more aimed at locals. There are 22 cross country trails. The longest, the Tour of the Plateau de Retord is a 23km odyssey through the three access points from the south to the north of the plateau.

The plateau offers rolling terrain through isolated summer farms, woods and open plateau with view of the surrounding mountain at certain points. Whether you practice cross-country skiing, snowshoeing or nordic ski touring or just love wide open spaces and beautiful landscapes, you are bound to find something to suit you.

The area is 95km from Lyon taking the Nantua exit from the autoroute and 65km from Geneva.

Due to the snow conditions this season I'd hardly skied this season so I came up with the aim of getting some kms in on the long tour of the Plateau de Retord black. "It's all well marked" assured the girl at the cash desk. The route is the N13 and lots of cross-roads don't have any signposts but in principal going north you take a left at each junction as far as la Chapelle where it is right at the cash desk. Left at the next junction towards Cuvéry, you turn right/south just before reaching this access area then head due south back to Hotonnes. To add a few more kms I did a the Tour des Fermes loop (in the wrong direction - oops!) but frustratingly despite being on the highest part of the circuit you don't actually see much of the Alps/Mont Blanc.

The tour is a bit like a Eicher staircase. I don't know if it was the extra friction of the super cold snow but you seem to climb all the time apart from a short descent back into Hotonnes. Over 600 meters but it seemed like more. Another skier assured me it was a "hard tour". He wasn't wrong and I was pleased to make it back to the car.

-7.5C at the car park at 10am. Cold snow a bit hard to ski on until it warmed up a bit. Early season conditions, the snow hadn't fully settled yet and some of the short ramps were probably harder than with a fuller snowpack. A few stones and grass but generally good skiing. 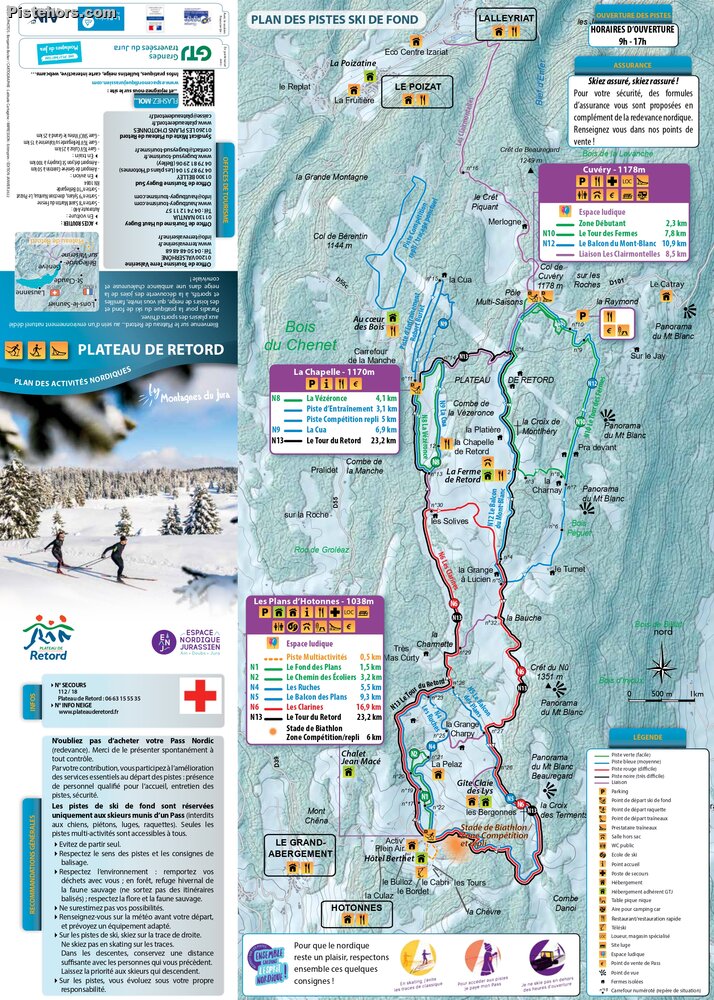