Worst winter for a generation in French Alps

20.6°C at Luchon at 618 meters in the Pyrenees, 19.6°C at Chamonix in the Haute-Savoie at 1000m, 19°C at la Mure close to Grenoble at 920m and 18.7 at Bourg-St-Maurice/les Arcs at 868 meters. No we are not talking about the first days of summer but the 7th of February as thermometers registered temperatures never seen in February in the French Mountains. There has been no significant snowfall in the French Alps since the 11th January. 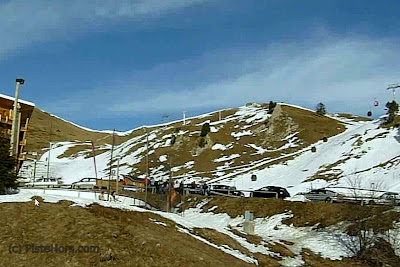 According to the French Weather Service it is one of the worst winters in 40 years with snow depths just 25% of normal. January also saw T-shirt weather. On the 8th January temperatures reached 19°C in Grenoble, breaking previous records by a degree. Last month also saw strong winds and rain to 2500 meters leaving the mountains covered in a layer of ice. A period of cold at the end of month at least enabled snow canons to operate. Even the low lying Col de Marcieu (1100m) was able to get four pistes operational with good cover. However snow canons have difficulty operating at temperatures higher than -4C. Snomax, a nucleating agent, which helps snow making between -2C and -4C is under a voluntary ban in France. A return to colder weather may not help much as some ski resorts are now short of water for snow making. It is also extremely expensive in terms of energy consumption. In a typical season, and 2011 is far from that, a big resort like l’Alpe d’Huez uses twice as much energy snow making as running the lifts.

Resorts have been using other techniques. On Saturday visitors to le Reposoir in the Haute-Savoie and the Col de Marcieu in the Isere, would have seen locals shoveling snow collected elsewhere onto the pistes to cover bare patches. At Autrans in the Vercors rocks have been removed from the slopes and the runs have been grassed to enable skiing with less snow, sometimes as little as 20cm where 50cm would have been necessary in the past.

Meteo France says that snow cover is currently very poor below 2,000 meters in the Isère and to 2,300 m in the two Savoies. Things are not so bad in the Southern Alps, Corsica and Western and Central Pyrenees. Weather systems have been able to bypass the High pressure blocking the Alps. Even Mount Etna in Italy has better cover than the Savoie! At the end of January the central Pyrenees saw a month’s worth of precipitation in a couple of days with up to 70cm of fresh snow above 2,000 meters. In Corsica the same weather system caused traffic chaos and brought down power lines. In the Southern Alps the 30-40cm of fresh on the 29th resulted in an avalanche fatality near the col d’Agnel. Conditions remain slightly below average under 1,900 meters in the Hautes Alpes. However the Mediterranean weather systems with the famous “lombard” have brought excellent snow cover to the Embrun/Gap area, the Queyras, Ubaye and Mercantour and even dumped 2 meters on the Italian side of Mont Blanc in January where Chamonix saw nothing, even le Fornet in Val d’Isere has seen fresh snow whereas the rest of the resort saw nothing.

The early season snow seems just a distance memory. Low lying stations are either closed or operating at reduced capacity and season workers are being laid off and shops and restaurants are suffering. Abondance, which relaunched last season has laid off a dozen lifties as have stations in the Vercors and Chartreuse. Resort such as the Val d’Arly have seen turnover drop by 10%. Misery for the small resorts has put a smile on the high altitude domains run by the Compagnie des Alpes. Chamonix has increased turnover by nearly 15% so far this season as skiers search for good snow. Some respite could be in sight, Meteo France is predicting snowfall from Monday although temperatures will remain relatively high, around 10°C.

We’ve had an up and down year, one week its ten below then the next its highs close to 60F.  Rained for weeks in Dec. which is unheard of.

Meteo France are now saying worst snow cover since 1970 in the Vanoise, Haute-Tarentaise and Maurienne.