Petzl is warning of fake climbing gear available on the market. They say the products are very difficult to identify without a detailed analysis. They are practically identical in terms of design, color, product markings, batch number and instructions. However in tests the products failed at around 2/3 rds of the minimum UIAA and European safety requirements. So far on rare examples have been found, none in North America.

Petzl advises only buying from authorized dealers found on their website. Climbers have been horrified by the news with some calling for better product tracking and registration. 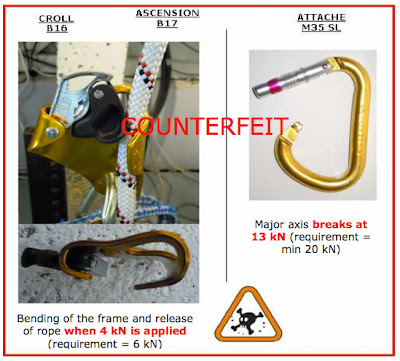 It is possible to find Petlz gear and Black Diamond gear on the Chinese equivalent of ebay:

Black Diamond has moved a lot of its production to China although in its own factories.

Shocking! You’d think that they would stick to counterfeiting handbags or whatever, not start doing it with safety equipment!

sounds too serious for just a small article a major investigation should be underway to get rid of this potentaily fatal equipment all us tourers climbers need more info ! NOW !-

WHEN WAS THE EQUIPMENT FIRST RECOGNISED AS FAKE WAT ARE THE SIGNS ETC ?