Cycling in the fag end of the year becomes pretty much opportunistic but some unexpected good weather gave me the chance to scratch two itches, a long ride (well long for me) and to visit an unknown ski area. I set out for Mont Pilat, a 4500' summit just south-west of Lyon in the Ardeche. Ok I don't really understand imperial but it looks more impressive than 1400 meters.

Local legend has it that the Monts du Pilat are named after one Pontius Pilatus, prefect of Judea who was fired in some disgrace due to a number of revolts in the province. He is alleged to have drowned himself in the Rhone shortly afterwards at the foot of the Pilat mountains.

The forecast may have been sun but the Rhone river is like the the Tyne, big, slow flowing and dirty with regular fogs from Autumn to Spring. It wasn't until I got above 500 meters at the pretty little village of Roisey-Vaisey that things began to clear but the damp and cold of the valley was replaced by a chilly breeze, the start of a Burle as the locals call it.

The roads are very quiet, much more so than in the Monts d'Or to the west of Lyon. Hardly a car. The gradients are also pleasant, around 4 to 5% unless you try one of the side roads which are much more serious. Roads tend to follow the contours because there are no 2000 meter cols to cross.

The final climb begins just before the cross country ski area of le Bessat. 6km that finally brings you out onto an open ridge line, and the remains of the small alpine ski area of la Jasserie. The Pilat consists of two summits: the crêt de la Perdrix (1431 m.) and the crêt de l'Œillon (1346m). The crêt de l'Œillon looks like Tracy Island, complete with rocket. It is actually the Pilat TV transmitter. You can ride right up to the building from the col de l'Œillon. A plane was doing loops, landing and taking off on the airstrip on top of the summit.

People have been skiing at la Jasserie since the early 1900s, and people still do, on much the same gear as then. Lightweight ski touring gear with free heels but from the 1920s to the early 1990s it was a bustling downhill ski area. First attempts were with a sled lift driven by a lorry engine, it is not clear if the device ever worked properly but in 1937 a real drag lift was installed. The pylons of the current lifts were built in 1967 and they operated until the early 1990s. On sunny days the resort would be bursting with skiers waiting half an hour for a lift to cover the 55 meters of vertical.

Why did it close? Climate Change say the experts but at 1400 meters snow cover is pretty reliable. It is likely that tastes changed. People didn't want to spend their precious Sundays doing half a dozen runs and standing in queues.

la Jasserie is also the source of the Gier river. The Romans built a 85km aquaduct to bring water to Lyon with a slope of 0.2%. Much of it survives and in the 19th century there were plans to restore it to feed water once again to the city which was suffering from drought.

The road back took me over the Col de la Perdrix (1378m), Col de la Croix du Chabouret (1201m), the Col du Gratteau (1204m) and the col de l'Œillon (1235m). From the last col it was a 20km descent back to where I left the car in the old town of Chavanay. On the way back there were fantastic views of the alpes but if you look in the center of the photo below you can see what looks like another drag lift. It is the Rebatte drag, built in 1982 and still running, but only in the summer for karting. The north-east facing ski area had 3 pistes of different levels but was closed in the winter in 2006; too many administrative issues.

The climb from Chavany to la Jasserie is about 1400 meters. There is then another 200 meters back over the Col d'Oeillon. Done anti-clockwise gives easier gradients than climbing via Pellusin. The only difference I would make is not taking the Route de Sautet but to continue via le Mas de Cheval.

Foggy in the valley but not too cold, cold above 500 meters. 3C at the summit with wind. Road very wet, especially on the north facing descent. 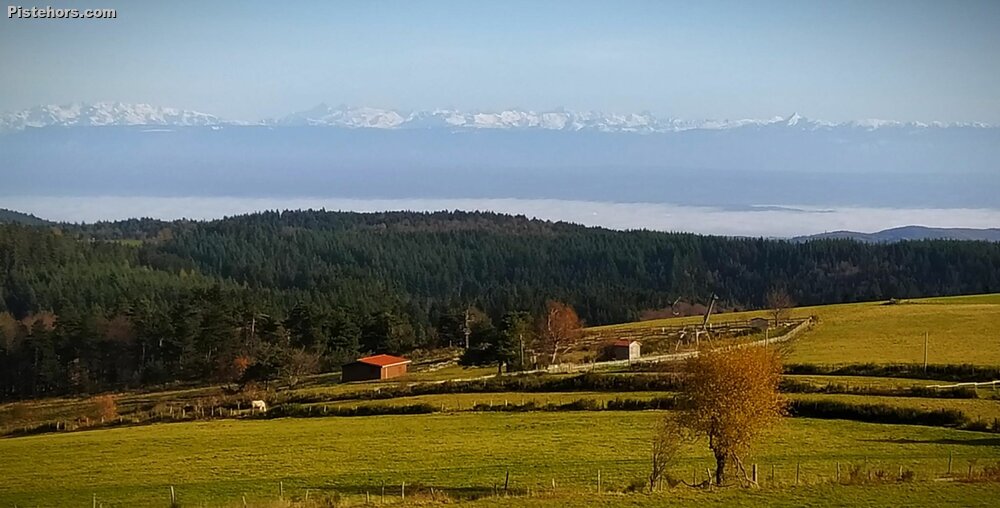