The steepest ski touring track is the fastest

Have you ever seen those ski touring tracks that go straight up the mountain and wondered who the masochist is who made them? No doubt a skimo racer. Well according to the researchers Bengt Kayser and Benoit Mariani of the Lausanne University Sports Sciences Institute taking the optimum route is the steepest route climbed as fast as possible. This makes sense as a less steep track means more horizontal distance to cover. However there is a trade off as steeper routes will require slow kick turns to be made. 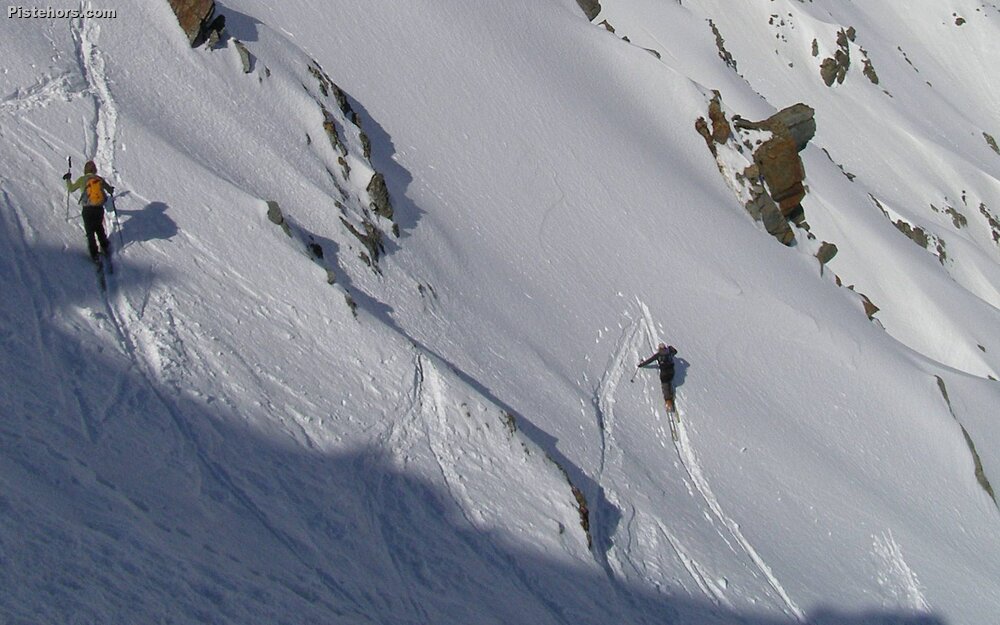 The scientists studied performances of three athletes in the 2018 Patrouille des Glaciers. This 53km event  between Zermatt and Verbier covers round 4400 meters of ascent and descent. 4800 skiers competed in teams of three. The study builds on work from 2016 on ski tourers in laboratory conditions.

A member of the winning team (who set a new record of 5h35m) was compared with two amateur athletes. They were equipped with GNSS (Global Navigation Satellite System) antennas, Heart Rate Monitors and an Inertial Measurement Unit (IMU) attached to the skis. The IMU can measure angular rate and orientation using accelerators and gyroscopes. Combined with the GPS data this would allow the researchers to determine slope angle as well as when athletes had to make kick turns due to the slope steepness, stride length, the duration of transitions etc.

The "pro" athlete had max heart rate of 205 bpm and weighed 69kg. During the race he carried an additional 6kg of gear and clothing. The researchers found that he made longer strides, especially on flatter sections, and climbed a steeper route than the other athletes. He also made less kick turns on his climb. He was much faster at transitions (a total of 5m30 for the entire race changing from climbing to skiing and vice-versa whereas the other skiers took 23 and 45m respectively). The race tops out at over 3000 meters and this had an effect on the speed of the skiers.

The research concluded that a combination of higher speed and steepest track gives the lowest vertical energy cost, provided the aerobic power needed can be maintained by the individual. The "pro" athlete climbed at 85% of his max heart rate, very close to his limit for this event. Skiers may chose a shallower, less efficient track if this avoids breaking trail as this has its own energy cost. In the PdG there are generally a range of climbing tracks made prior to the race.

The skier and gear weight are also important factors. Winning times have reduced considerably since 1985 in part due to lighter gear. Skill is also important, efficient kick turns, maintaining a high cadence and good glide as well keeping faffing on transitions to a minimum.