Sixteen people have been killed in the Alps over the weekend. In the most serious incident seven ski tourers, including a high mountain guide and mountain leader died and two others are in a serious condition, in what one survivor described as a "night of hell". The skiers were on the Chamonix-Zermatt Haute Route in the Pigne d&#39Arolla sector.

The skiers were making for the cabane des Vignettes (3160 m) on the penultimate stage of the tour when they were hit by a storm and whiteout conditions. They were not expected at the refuge having changed their route due to the weather conditions. They spent the night in the open at around 3200 meters in temperatures of -10C, lower with the windchill. At first light 7 helicopters were dispatched to the scene but were unable to land. Six of the fatalities were due to hypothermia, an Italian High Mountain Guide was fatally injured after falling while descending to the refuge on an exposed ridge. The other skiers decided to stop and shelter as best they could, they were only a few hundred meters from safety. Their cries for help were heard early in the morning.

The victims were Italian, French, a Bulgarian International Mountain Leader and wife of the guide and a German. The guide was named as Mario Castiglioni from Como but resident in the Valais. He was leading a group of nine skiers but other skiers lost in the storm had joined his group. The Italian skiers were good friends, experienced mountaineers and members of the Italian Alpine Club (CAI). Elisabetta Paolucci, a school teacher from Bolzano, had described the trip as her "great adventure." Husband and wife Marcello Alberti and Gabriella Bernardi were well known in the South Tyrol area where they lived and worked. A sixth Italian victim died on Tuesday in hospital.

Two climbers were killed in the Mönch sector due to hypothermia. The men had climbed the Mönch via the Lauperrippe and were descending the north-east ridge towards the Eigerjoch when they were caught by the storm.

In Chamonix a 35 year old climber has been killed in the couloir Couturier due to the “bad weather conditions”. There was an avalanche on the glacier Rond on the west side of the Aiguille du Midi which hit a group of four French skiers. A 35 year old man was killed.

In the Savoie a 56 year old local, female skier fell to her death in the steep couloir de la Clapière on the Pic du Galibier on Saturday morning after losing a ski. She was with two other skiers at the time.

Two young members of the Dolomite Mountain Rescue team were killed after falling in the top sector of the Oppel Couloir on the Antelao summit. Described as "expert mountaineers" they had intended to ski from the summit after the climb. Another member of the mountain rescue suffered very serious injuries a few days previously after falling 700 meters in the same couloir.

On Monday afternoon two French ski tourers triggered a slab avalanche on the Allalin glacier above Saas Fee in Switzerland in the Feejoch sector. The slide killed one and injured the other skier. The couple were heading for the Mittelalalin. There had been fresh snow accompanied by high winds overnight.

A Russian snowshoer has been found dead on the Monte Rosa at 4200 meters altitude after getting caught in the storm on Sunday. The woman had left the Margherita hut on Saturday. En-route she spoke with a guide who advised her not to cross to Zermatt given the difficulty and the forecast of bad weather. She decided to head to the Mantova refuge but never arrived. The search operation was complicated by the extreme weather conditions.

A catalog of errors

The only Italian survivor of the Haute-Route disaster, Milanese architect Tommaso Piccioli, spoke of a "night of hell". He was unable to see his friends in the dark but shouted at them to stay awake. He moved all night to keep warm and raised the alarm when he saw skiers moving at the hut when dawn broke. He knew they were just a five hundred meters from safety but they were unable to reach the hut. "if you sleep, you will die" he told a German women next to him, "you need to keep moving, move your arms, your legs." The women survived but when dawn came he saw another skier face down in the snow and knew they had not made it.

"It was was a catalog of errors, we should never have set out when we knew bad weather would start at 10am, we were lost four, or five times, I was the only person with a working GPS but we eventually reached a point where we could no longer move due to the visibility and the storm, night arrived and we found ourselves on a ridge, that was a huge error because in a storm you don't stop on a ridge, you need to be lower down where you can make a snow cave and shelter. I tried not to fall asleep because in those conditions if you sleep, hypothermia will kill you. Thinking of my wife kept me going." The group were stuck on rocky ground so were unable to make snow caves and sheltered as best they could among the rocks. They were well equipped. "At that point I knew that most of us would die, we did not know the tour was long and hard because no-one had told us. Whether you survived was down to our individual fitness, experience and where we could find some shelter, all my friends are dead." 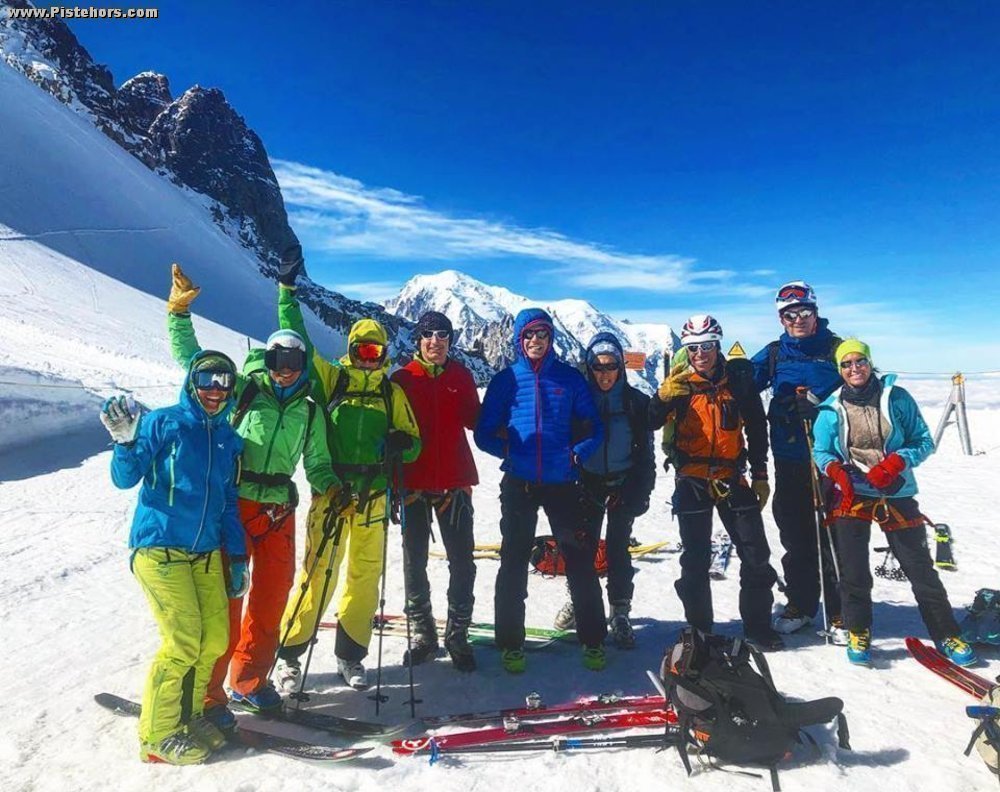 The group on the first day of the Haute-Route