Winter 2011/12 will be remembered as cold and snowy in France, at least in an arc stretching from the Vosges in the North to the Hautes-Alpes in the south. A two week freeze February saw the coldest temperatures since 1986. Strong northerly winds made the situation worse, freezing central heating pipes and diesel and leaving hundreds of motorists stranded. However the cold was bracketed by warm, but snowy, weather. 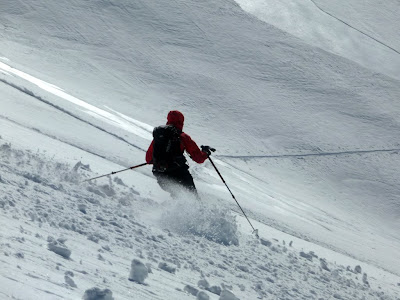 The first generalised snowfall in the Northern Alps occurred on the weekend of the 8th October (20cm) and it seemed that we were set for another early season. In 2010 the mid mountain resort of les 7 Laux was able to open for the autumn half term week. Their earliest opening on record.

First snow on the Chartreuse

It was not to be, there followed 2 months of abnormally warm and dry weather.

The situation was different in the Southern Alps. The high mountain passes of the Agnel and Restefond saw a weather system bringing 30cm of snow on the last weekend of October and this was topped up by another 80cm at the start of November. This same weather system barely penetrated into the Northern Alps bringing just 25cm at the summit of the 3000m Bellecote glacier above la Plagne. However the storm surprised guide Olivier Sourzac and his client Charlotte de Metz-Noblat on the summit of the Grandes Jorasses. Their bodies were recovered after 6 days of bad weather.

The snow conditions in the Southern Alps were enough to start the touring season on passes such as the Lauteret, Galibier and Agnel. The early November snow was followed by a long period of sunny stable weather and conditions were spring-like. In the Northern Alps around 25cm of snow could be found on shaded northern slopes above 2300 meters.

December
By early December ski resorts, which would normally be open on natural snow cover, were getting nervous. The month was dominated by a moist south-westerly airstream. The first skiable snow fell on the 5-7th of December and this was topped up by tropical storm Joachim which brought over a meter of snow at altitude over the 15th -16th December. There were also some very strong winds. The weather station on the 1465 meter summit of the Puy-de-Dôme in the Massif Central recorded a gust of 212 km/h.

Overall temperatures were 2.0 °C above average but with less sun and more rain and snow fall than average. Looking at the weather station at Bourg St Maurice situated at 885 meters in the Tarentaise it recorded three times the normal precipitation (330mm, enough for 1 to 3 meters of snow at altitude). The month was slightly colder than normal due to a lack of sunshine, at least in the valleys which were often cloud covered due to a temperature inversion. 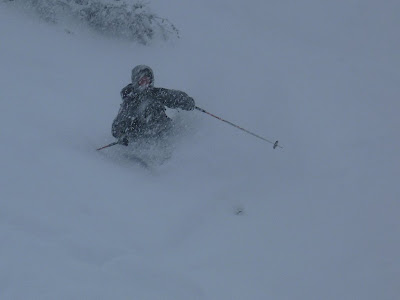 Joachim brought very little snow to the Mediterranean region which experienced one of the driest winters for 50 years but dumped over a meter on the Eastern Pyrenees and 50cm in the western ranges.

Cloudy in the Valleys

The Christmas period had some of the best ski conditions in the Northern and Hautes Alps for 30 years with resorts posting a meter of snow at the bottom of the ski runs.

New Year’s day was the warmest since 1947 although the alpine valleys were blanketted in thick fog due to a temperature inversion. Rain fell to 2300 meters causing a lot of natural avalanche activity with some brief periods at risk 5. The start of the month experienced extremely strong winds. There were regular storm cycles through to the end of January. The snow line dropped to 1100-1300 bringing half a meter of fresh snow at those altitudes with a small amount of snow down valley levels. 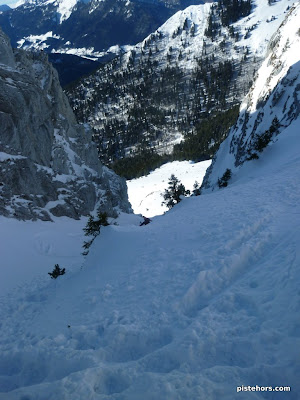 At Bourg St Maurice temperatures were close to normal with about 50% more precipitation than usual.

The fresh snow and strong winds at the start of the month led to a couple of avalanche incidents but the first fatality of the season only occured on the 29th. This was the precursor of a series of incidents at the beginning of February.

February - March
An anticyclone over Russia/Scandinavia at the end of January brought arctic air to Europe.  The period 1st – 13th of February saw an intense cold spell, the 5th worst since 1947. Bourg St Maurice recorded -18.8°C on the 5th, not far from the -19.6°C set on 11th February 1986. The average temperature for the month was around -4°C less than normal. 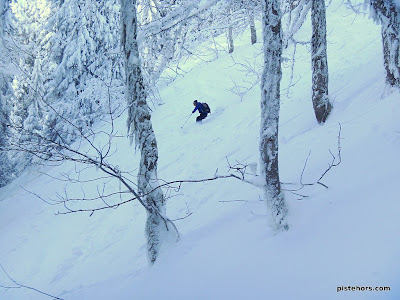 From the 20th temperatures were largely above average and this trend continued into the first half of March. Both February and early March have been very dry with little significant snowfall in the Northern Alps except mid month when some areas received up to 50cm. There were also a couple of small falls in the first to second week of March. The exception were parts of the Western Pyrenees which saw significant snowfall at the start of the February, over 200cm in Aspe-Ossau for example. The Southern Alps have been very dry this winter but received some respite at the start of March.

The fresh snow (at most 30cm) at the end of January accompanied by a week of strong North-Easterly winds created dangerous conditions at the start of February including low altitudes in the Pre-Alps. This surprised a number of skiers creating a cluster of avalanche incidents from the 1st to the 5th including 3 deaths. On the first a group of soldiers triggered a slide at Valloire, killing 1. On the 4th a Dutch skier was killed at Thollon-les Memise and a ski instructor was seriously injured at Sommand. Both incidents were in the Haute-Savoie. Finally on the 5th a ski tourer was killed in the Vercors on a South facing slope, there were two other incidents on similar slopes in the nearby Chartreuse range, neither with victims. 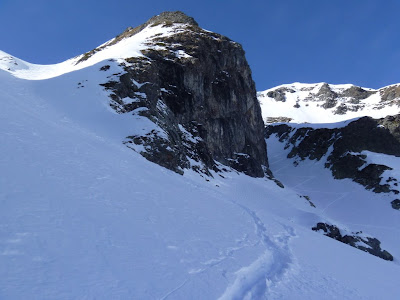 According to Daniel Goetz, a researcher with Meteo France ”the snow cover during 2011-2012 was not exceptional compared with the first half of the 20th century but you have to go back to 1981-1982 to find similar conditions. At the start of January the snow pack had twice its normal depth in the Northern Alps and was 50% above average in the Hautes-Alps”. In the Swiss Berner-Oberland total snowfall was 800cm on the 10th January 2012 at 2500 meters.

There have been 8 fatalities in avalanches this winter in the French Alps in separate incidents. This is the lowest figure recorded since 1970. Normally the period December to February sees the majority of avalanche fatalities. The main reason for this improvement was a very stable snow pack. With good snow conditions skiers also had a wide choice of routes and in the main took on board avalanche warnings issued by the authorities. The new Meteo France pictorial avalanche bulletin may also have aided better decision making. There has been a continued training effort by the ANENA, FFME and FFCAM since the start of winter targeted at ski tourers. 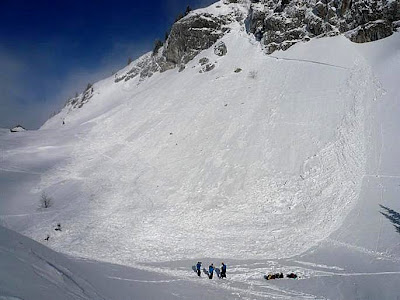 With the high snowfalls and a number of risk 5 days the low figure for fatalities may seem counterintuitive. At the start of December the Northern Alps had a weak layer of depth hoar and faceted snow on north facing slopes above 2300 meters. The Southern Alps had a deeper snow pack but this had also experienced a month of facet forming anticyclonic conditions. There was very further snow in the south until the start of March. In the North the weak layer was buried by over a meter of fresh snow that fell in the first half of December. This was rapidly stabilized by a freeze-thaw cycle and high altitude rain at the start of January. By mid January the snow-pack consisted of over a meter of hard snow which bridged any weak layers. 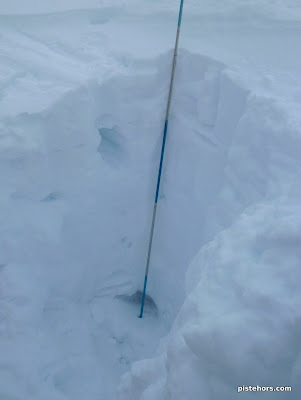 The good conditions in the Pre-Alps also meant ski tourers focused their attention on routes in these generally less dangerous areas, especially where the risk was higher elsewhere. On Southern aspects and below 2300 meters the December snow had fallen directly on bare ground and the snow depth slowed down the formation of any weak layers. The exception was the start of February where very strong winds created small slabs on south facing slopes with an number of incidents in the Vercors, Chartreuse and Bauges. Although the slope aspects at risk were clearly shown in the bulletin’s pictogram it appears that with the overall headline figure of 2/5 skiers had dropped their guard. Half the fatal avalanche incidents occurred at this risk level, the normal figure for France is just 8%. 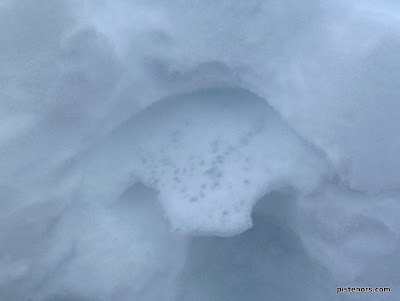 The snowfall directly onto warm ground contributed to an increase in natural avalanche activity, especially on grassy slopes, as the snow pack was poorly bonded in places. Skiers noticed a number of glide cracks. High altitude rain can overload the snow pack and warm temperatures causes to melt-water to percolate down to the bed. This winter saw a number of risk 4 and 5 days but the danger was short lived with the headline risk quickly falling back to 2.

Natural avalanches are slow moving and rarely concern skiers unless they are in or above terrain traps. They caused a nightmare for ski resorts and authorities as they are very difficult to clear with explosives and occur randomly although frequently at the warmest part of the day. Roads and ski slopes were frequently closed during the winter. One spectacular incident hit a working ski lift at St Francois-Longchamps. 41 skiers trapped on the lift had to be winched to safety by the rescue services. The accident could easily have been far more serious.