An avalanche on the Vallée Blanche

When skiing the normal route of the Vallée Blanche we tend to focus on the high mountain dangers, a fall from the ridge or a crevasse, rather then avalanches. At 12h30 on Saturday the rail line that links Chamonix to the Mer de Glace was blocked by a slide. An inconvenience for 100 passengers who had to be airlifted from Montenvers but a drama was unfolding lower down for a number of skiers descending the classic Vallée Blanche route. An account of the events by Bruno and posted on his website 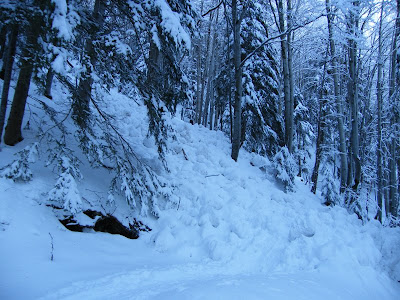 On Saturday I was caught by a slide at 1300 meters under the Montenvers rail line after skiing the Vallée Blanche. I’ve written this account to see what lessons can be learned by others.

We were 4 who took the Aiguille du Midi cable car at 9h15. The avalanche risk was 2/5 with a good refreeze. No risk of slabs in the bulletin and the last snowfall was over a week ago and the wind had not been too strong. Lower down it was very warm, almost no refreeze and the risk under 2000m was 3/5 with a danger of natural avalanches. Everyone was equipped with avalanche gear. We started skiing at 10am skiing straight down to the VB without doing the Rognon loop. The weather was good, fresh without being freezing. The tops: Dent du Geant, Mont Blanc etc. were cloud covered.

At the end of the VB we climbed 200m to join the North West slopes above Chamonix. From a snack bar the route makes a big traverse of the hill through woods. Despite the northerly orientation there didn’t seem to be any refreeze. We had dropped out guard, the snack bar and tracks made us think of a ski resort, in our heads we were no longer in a high mountain environment, we even thought of making a second descent. There were a lot of people skiing when suddenly I saw a cloud of snow in front, 2 meters high, an avalanche.

Avalanche
I stopped dead with a skid, I just had time to think “I’ve had a close shave” when the sky fell in on me. I was pushed to the ground, I felt the snow crushing me more and more, burying me alive.

I thought, this can’t be happening, I tried to get up and then the snow stopped. I managed to make a bit of space. my head was half out of the snow but I was stuck, I had maybe 30cm of snow on top of me. I’d heard that once slide tops you can’t move, you have to be in this situation to see just how true it is. I turned my head but I couldn’t see the path.

I shouted, I called my mate Jon. He replied, he had stopped before me and wasn’t taken. I asked him to get his shovel and dig me out. He said he would have to be careful, there could be a secondary avalanche as there was still some snow coming down. He came down and cleared my head with his hands but soon realized he couldn’t dig the snow without his shovel which he climbed back to find. I asked him where the others were, Michka was there somewhere but he hadn’t seen Géraud but he didn’t think he was under the snow.

Jon came back with his shovel, aided by two Italians. It seemed like ages but it was maybe just a couple of minutes that I’d been under the snow. They quickly got me out. One of the metal cables used to secure my skis to my boots had been sliced in two by the force of the avalanche. I was lucky to have just been on the edge of the slide. A meter or two further and I would have been carried 300 meters down the slope. My thigh hurt but I could walk. I turned on my beacon to check no one was under the slide. A queue was building up on one side of the avalanche couloir and people began to cross the debris on foot. The only signals were from a group 20 meters from me, no one appeared to be underneath. It seemed to be the end of the incident. Jon and the Italian’s went to look for my missing ski while I checked the debris with my beacon.

At that point a guy arrived and asked me what happened. He looked surprised and said “I thought they secured the route!”. Another group commented “lucky you’ve got avalanche beacon”. Did they?

Six to eight people were now crossing the debris, most on foot, skis or snowboards in hand when Jon shouted “avalanche, avalanche, get out the way!”. A second slide was coming down. People turned back except for a women snowboarder who tried to reach the other side. The slope was steep and hard and she lost her footing and started to slide down the slope as the avalanche caught up with her and took her 300 meters downhill. Luckily she stayed on the edge of the slide. I told everyone to watch her while Jon called 112.

The slide stopped and the woman managed to free herself. A friend called her on her mobile and she confirmed she was ok. A guide informed the PGHM to say all was well. Géraud and Michka had now climbed back up to us, they’d missed the events and we explained what happened to them. Soon everyone was gone, Jon and Géraud skied down to the snowboarder to see if she needed any help and to look for my ski and to recheck the debris with their beacons. They found my ski as well as the board belonging to the woman. She recovered it from the guides office later in the day having set out for Cham on foot. I had badly hurt my leg and the woman had to go to casualty for 7 stitches to her leg.

Excepting the small injuries we were all very lucky. Me to have stopped in time and the snowboarder to not have been buried.

All credit to Jon for having thought about the risk of a secondary avalanche and to have spotted the second slide because we had heard nothing. You often hear that once a slide has happened the zone is safe, it is not true. We even heard a guide tell his clients “that’s not going to slide again” as they were crossing the debris. That poses a question for rescuers, if one person is searching you need a second to watch out for secondary avalanches. The people who were crossing the debris didn’t see or hear the second avalanche coming.

Off piste I always ski with a beacon, a metal shovel and probe. It is the basic equipment once you leave ski runs. From now on I will also be wearing a helmet, not a ski helmet but a lightweight climbing lid. An AvaLung can help you breath under snow, it would not have helped me because I would have had no time to put the tube in my mouth. An AirBag could also have been useful, again I would have had no time to pull the handle but the snowboarder would have. It will be my next purchase.

Both Géraud and I have done avalanche training and we practice. The search procedure is fairly instinctive for us. I’ve been a bit lax on easy routes but on serious routes I always make sure my buddies are as capable as me. Everything takes time, for Jon to get his skis off and get his shovel out, you need to train to be quick and have the right reflexes.

A ski tour is only finished when you reach the car-park. In our heads we were safe after the glacier. Another thing, we were making a loop, we were descending a route where we didn’t know the conditions.

Before each tour make sure you are prepared, that your friends are prepared. Keep your guard up. Watch out for received wisdom, question what you’ve heard about avalanches. Train. Be ready to make a U-turn, remember that where there is a doubt, there is no doubt. As André Roch once said “it’s great that you are an avalanche expert, only the avalanche doesn’t know that”.

"From now on I will also be wearing a helmet, not a ski helmet but a lightweight climbing lid”

Would you care to explain this?

Thank’s for the report.