Carnage in the Canyon

On the 13th November 2011 two skiers traversed the mid-cirque of Peruvian Gulch at Snowbird to reach the Gad Valley ridgeline, remotely triggering a 60 cm deep, 200 meter wide avalanche that covered their boot tracks below. They may not have even seen this slide in the low cloud and poor visibility. 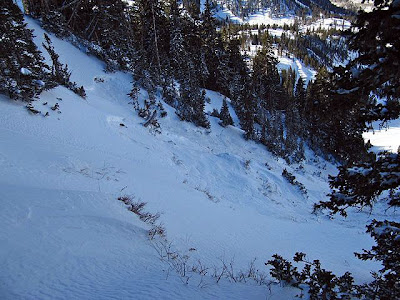 Clipping into skis and board they skied the ridgeline then stopped. The skiers were above the south chute, a steep, rocky and tree lined couloir that drops 350 meters into Gad Valley. The first skier made three turns then - game over.

The skier was none other than Jamie Pierre. Jamie had completed a 70 meter plus cliff huck back in 2006 in Wyoming. Despite numerous injuries during his career he seemed immortal. Little Cottonwood Canyon was his backyard. Pierre’s death shocked skiers and reverberated around the planet in newspaper and on the web.

This wasn’t the only accident that day. Drew Hardesty of the Utah Avalanche Center says they logged 18 human triggered slides which, apart from Pierre’s death, led to a fractured femur and a whole load of lost gear. Another group were extremely lucky to escape without fatalities.

Writing for The Avalanche Review (Vol 30. No.3 February 2012 - Madness in the Mountains) Hardesty says that the incidents are hard to understand but are at the epicenter of instability and desire. “Everyone understood the instability but they just couldn’t reign in the desire. Many skier parties triggered or walked past recently triggered slides before jumping into an adjacent slope. What contributed to this day of madness?”

Drew suggests the following factors are in play, and I think we can all identify with at least one:

* First powder day of the winter, and it was on a Sunday. Hunger and Competition.

* Everyone he interviewed was an expert skier/snowboarder with at least some avalanche education. Each knew the terrain ultimately. Jamie had skied the South Chute in the last pre-season. Familiarity.

* Their collective experience told them that ski areas are safe - no need to assess the stability, no need to follow safe travel protocol, no need to be equipped with S&R gear. Complacency.

* November 13th was only a few months after the 18 meter 2011 season which lasted well into July with a stable spring snow pack.

Guide and Alta Patroller Dave Richards agrees that Powder Panic, Terrain Familiarity and Group Think all played a role. But he also believes that experienced skiers reach a point when they begin to think slides are manageable. Richards was involved in the rescue of the first group that fateful Sunday. Despite warnings from a colleague he decided to go in high, ski cut the slope like he’d done on many similar days. It was only when he triggered a slide he realised how unmanageable the snow pack was, today wasn’t like other days, it never is. Without having answers Richard’s thinks “We need to find a way to diminish confidence”.

Drew sums up “Perhaps Jamie’s luck just ran out. Without question. to know the snow-pack takes knowledge, to know oneself takes wisdom”

Wow that’s such a crazy story!