Climb
From the parking at pt1220m above le Baure or higher later in the Spring follow the road to the Col du Coq (named after the Rock Ptarmigan that are common in the sector). From the Col descend a few meters towards the old ski slopes without removing skins then climb the NE slopes under the Bec Charvet. These catch the sun early in the day in Spring. At the top of the old runs there is a thicket of brushwood. At 1630 meters traverse NW to the NE ridge of the Bec Charvet and climb this to the summit.

Descent
From the summit ski north to arrive on the right hand side of a large, steep clearing in the woods due to landslides. Ski down one of the couloirs on the right hand bank, then optionally traverse into the clearing lower down. Continue to the Bois de Gros Muset where a path traverses at 1450m. If the snow cover is sufficient continue as far as the road at 1300 meters. Skin back up to the Col or to the Pravouta.

this route is possible to late April, early May, in that case park at the old ski resort parking at 1400m on the north side of the Col du Coq. You can generally ski to near the bottom of the old Bec Charvet piste then skin or walk back to the car park

Comments on route: The clearing under the north side of the Bec Charvet are subject to avalanches.

Description: From the summit ski due West to a clearing in the trees. At the end of this clearing, at about 1675m traverse left into a large bowl (avalanche risk). At the bottom it is easier to ski in the woods as the bowl is full of brushwood. You cross a path at pt 1557 meters to arrive at the Pres du Peynon at 1280 meters. The forest is very skiable and the slopes hold powder for a long time. The descent is subject to avalanche control by helicopter work as it dominates the cross country ski trail.
Rating: 3.2/E1
Orientation: West
Vertical: 720

Description: Same as the figure of Eight but at the bottom of the BE Charvet NW by the base of the old ski area climb to the Col de Pravouta via the eponymous habert (refuge). Contine N to the summit of the Roc d'Arguille. Remove your skins and ski another 200m along the summit ridge to a clearing on your right. Descend to point 1624m into a canyon with a steep wall to the right, follow the valley de Giclard to Perquelin. Reclimb to the col des Ayes then return to the carpark.
Rating: 3.1/E1
Orientation: North
Vertical: 1750 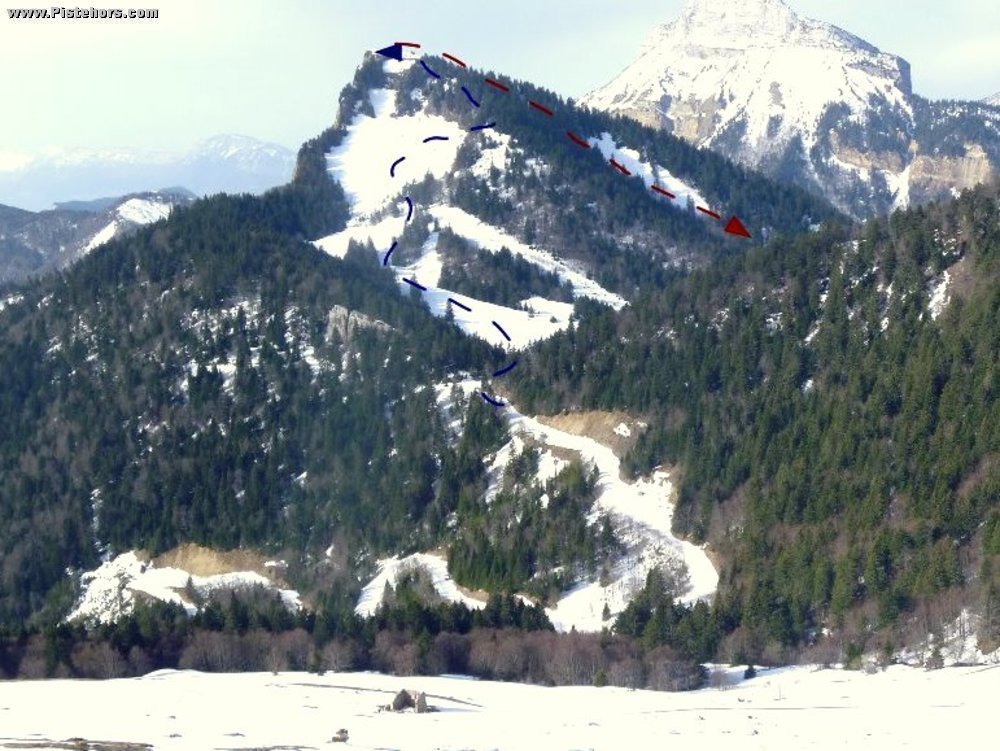