The cross country ski area has 23km of prepared cross country trails. This may seem small but there is no doubling up of runs as you get in some resorts. The trails are divided into 5 loops or loipe with gradings of green, blue, red, black and a small "yellow" loop. There isn't a big difference in the difficulty. The red has a steep climb and is shaded so there is a risk of hard descents. The black has a couple of long drags and a fast but not too steep descent back to the trailhead. You can pic-nic at le Laissonay with views of the peaks of the Vanoise above. The trails are also marked with signs giving information about the environment.

Trip Report
Who doesn't like a challenge but as JFK said, they should be hard, not easy. In mid March I got an email from Fischer Skis about the Red Bull Nordenskiöldsloppe. 220 km of cross country skiing over a month. Only it was already ten days into the challenge. That level 20 days, well that's only 10km per day. Only I have a job.

My first qualifying trip was on the 7th March 2021, a cross country ski race at the Barioz ski area. 21km. The following week was a bit of a lull due to the weather but I classic skied to the Charmant Som before work, 12km. I would have to up my game. On the 16th I managed 29km at the Chamrousse but the weather had turned spring like and pistes were getting unskiable after 11am. On the 21st I managed the closing day at the Desert d'Entremonts, 26km. Time to get serious and on the 24th 39km at les Saisies, 32km at la Feclaz which brought me to today and just a few km to complete the challenge.

As we are soon to be back in lockdown I decided to visit somewhere different. Why not Champagny, which is a back door into the la Plagne alpine ski area but also has a high alpine valley offering cross country. It is also relatively flat after all the recent climbing, or so I thought. My plan was to do the pistes in order of difficulty, twice if possible. For this I would have to start at 9am. The green had been in the sun for about an hour when I set out and was just beginning to soften. It is nice and flat and winds through the village before heading out on a 5km loop on the right side of the valley. The great thing about the trails is they are not too long and all end up back at the chalet and car park if you need clothes or to grab a drink. The blue was more in the shade and crosses over to the left bank, following the river back to the chalet but you can detour off for another 2km on the Pierra Neva red. This has a steep climb on the way back and a few shady descents with hard snow. What is great is that there are km posts so you can see your progress.

I was now ready to try the black which climbs up the valley to the summer village of Lionnasay. At the village there is a final loop and the waterfall and avalanche debris under the Cascade du Py. The descent is not steep but quite fast with no real technical challenge, sweeping back to the chalet via the village of Friburge but you can take the Champ du Pont loop at the end. Rinse and repeat but I zapped the Red and Champ du Pont on the second tour as I was getting tired. That completed the challenge with 235km covered over some 5400 vertical meters. According to Strava some people have done over 10x that distance.

Good refreeze, pistes were hard at 9am but rapidly softened up except the red which was in shadow. Still ok on the black at midday. 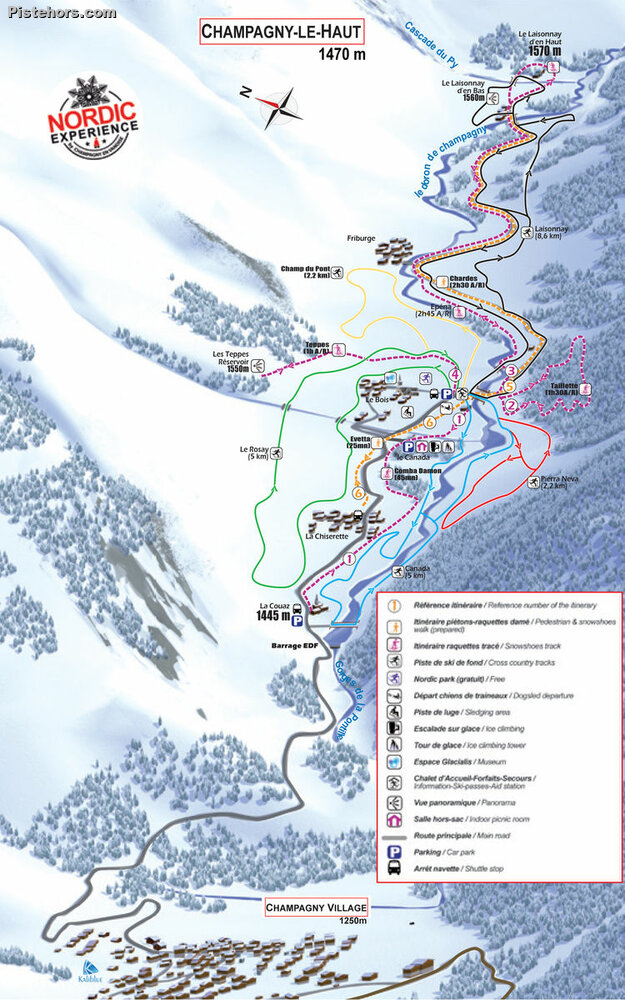 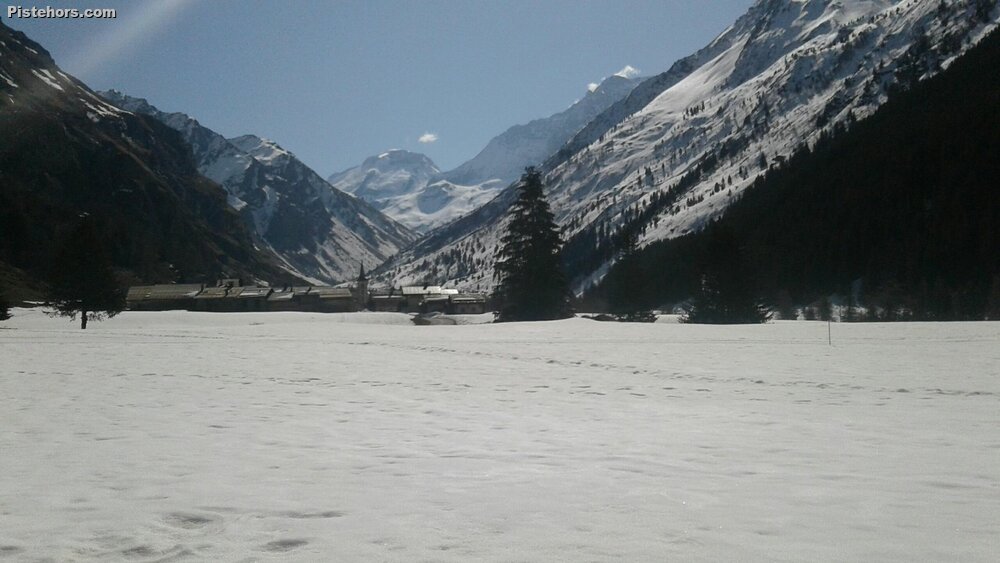 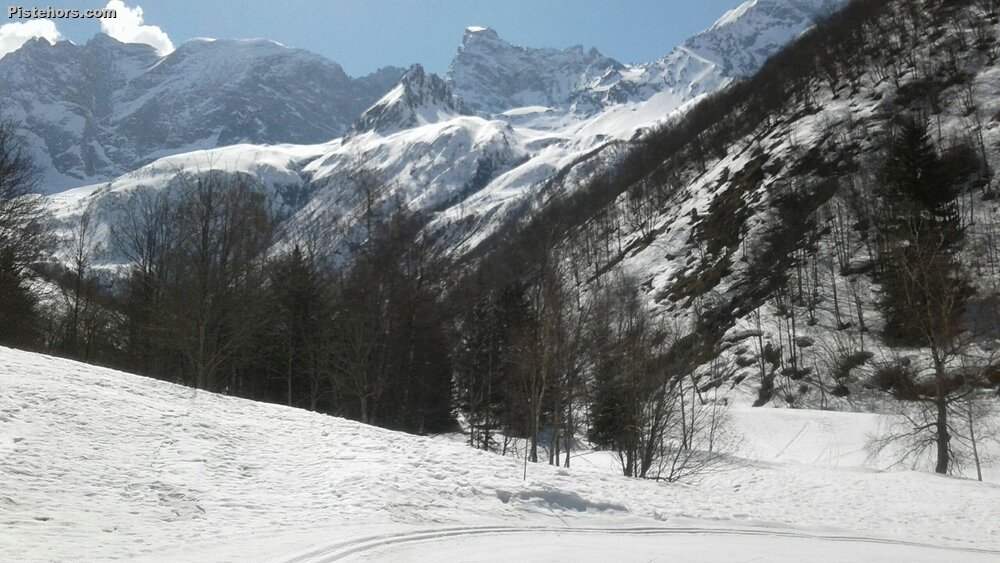 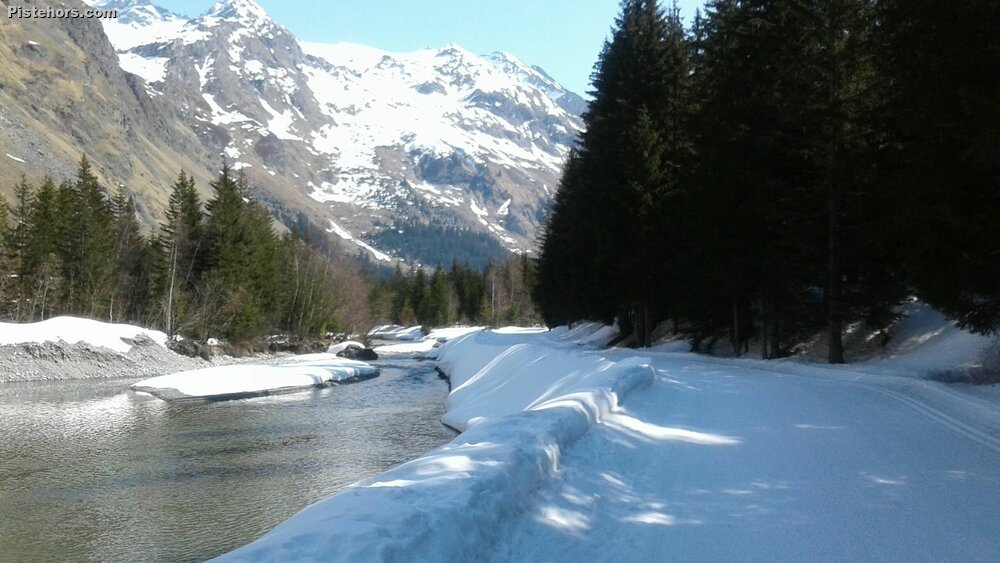 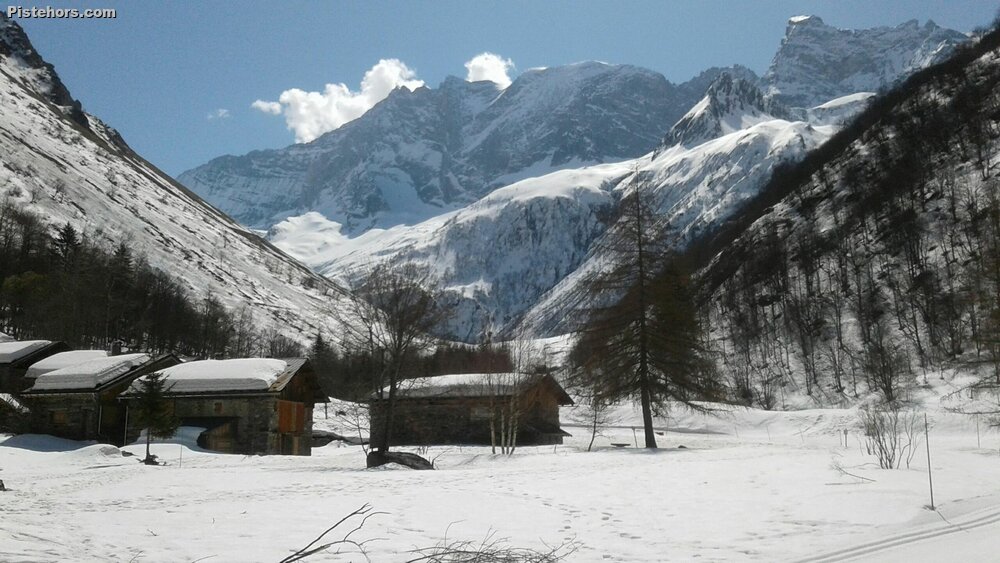 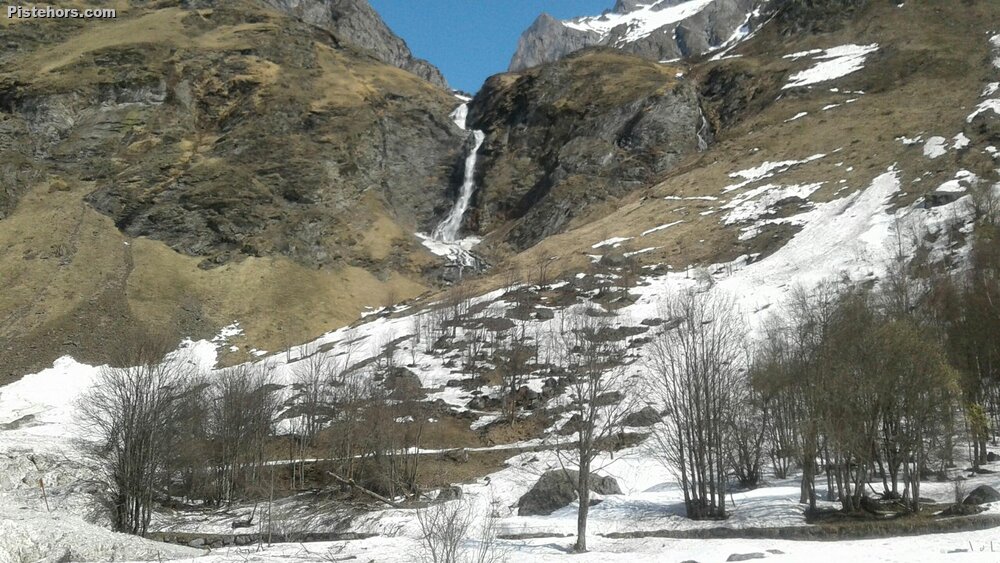