Dangers
The North East slope is suspended above high cliffs. There is only one way off the summit at the bottom via the last but one couloir which you ski down a short distance before crossing back north across another couloir to a break where you can ski a small north-east facing couloir to the Lac du Crop. The

Description
From the Pont de la Betta car park (1300 meters) take the track to the right to the Betta bridge, just after the bridge take a steep path to the left which joins the wide GR 549 trail about 100 meters higher up. Follow this path to the SW to a footbridge which crosses over the Crop stream (Pont des Pendules). Continue up the slope through brushwood, the slope steepens and at around 1750 meters turn eastwards under small cliff bands (danger ice  and stonefall). After a short traverse climb steep slopes up to the lac du Crop at 1950 meters. Traverse the left or right bank to climb to the lac Bleu, at around 2100 meters turn SW to climb a wide slope to the Petit Replomb then Grand Replomb (2506m). From the summit retrace your steps a few meters to descend a short, narrow and exposed slope (around 40/45° for 50 meters) that leads into the NE Face. The face opens out and the slope decreases a bit, ski down around 150 meters than traverse across the slope almost to the end, take the second from last couloir, ski down about 50 meters before traversing ESE to a small breach which leads into a small but steep couloir about 100 meters long. At the bottom of this couloir continue traversing east to exit onto the slopes above the lac du Crop. Return via the route you climbed.

Chris called, he wanted to ski the West couloir of the Grand Replomb, I thought it would be frozen and proposed the east slopes, we split the difference and settled for the NE face of the same peak. A route I hadn't skied before but with difficult route finding - only one non obvious way off the suspended summit bowl and a fairly major line although it has slowly been de-rated from 5.1 to 4.2 with some suggesting 4.1 is fairer. It is definitely harder than the 4.1 routes I've skied. We decided to ski the slope "a vu", that is we would climb by the easier NE bowl without checking the descent first.

From the summit there is a little access couloir that is very exposed with cliffs on both sides. Afterwards we found a mix of spring snow and ice - the old saharan sand layer was deep frozen. Chris then skied across to the top of the powder bowl but reported it was guarded by a section of tricky ice. I skied down directly 30 meters on some old powder then traversed below Chris. The slope was now powder or snow that had destructured in the cold that was really pleasant to ski. Further down it turned more springlike. We traversed right across the slope to take a couloir near the end, where it gets steeper we traversed over to the right to a gap that leads to the only way off the summit, a narrow and steep couloir that faces south east and had very soft snow. It was still possible to do a few turns down, at the exit you can ski another couloir down to the lac Bleu or continue to another slope that leads to a tiny couloir and again down to the lac Bleu. It was now a simple job to ski back to the car park on nice spring snow apart from the icy traverse below the lac du Crop.

Good freeze. Icy slopes below the crop in the morning before 10h. Old powder / destructurized snow at the top of the NE face but ice near the summit turning into transformed snow lower down. Overcooked on the east facing exit couloir but good skiing elsewhere. 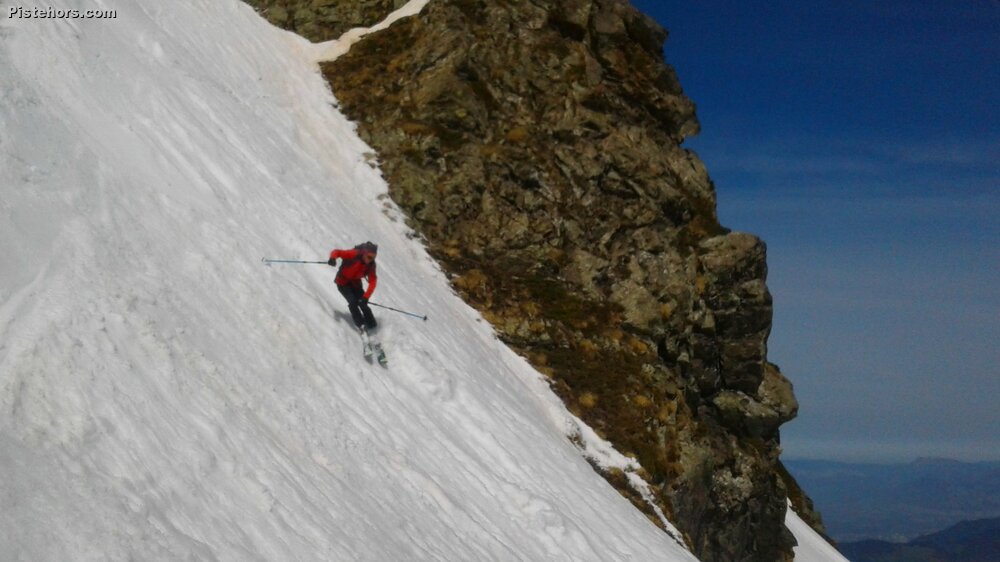 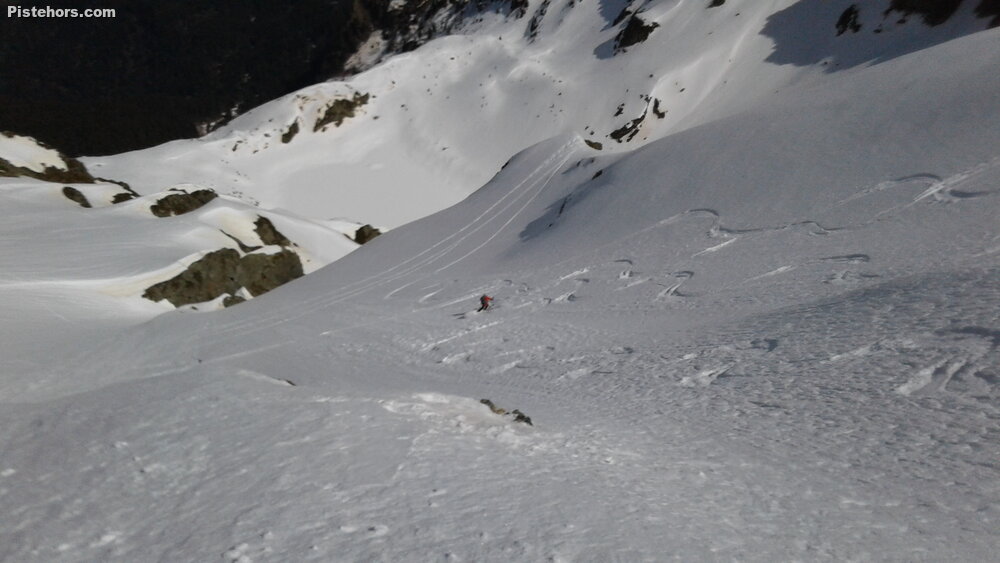 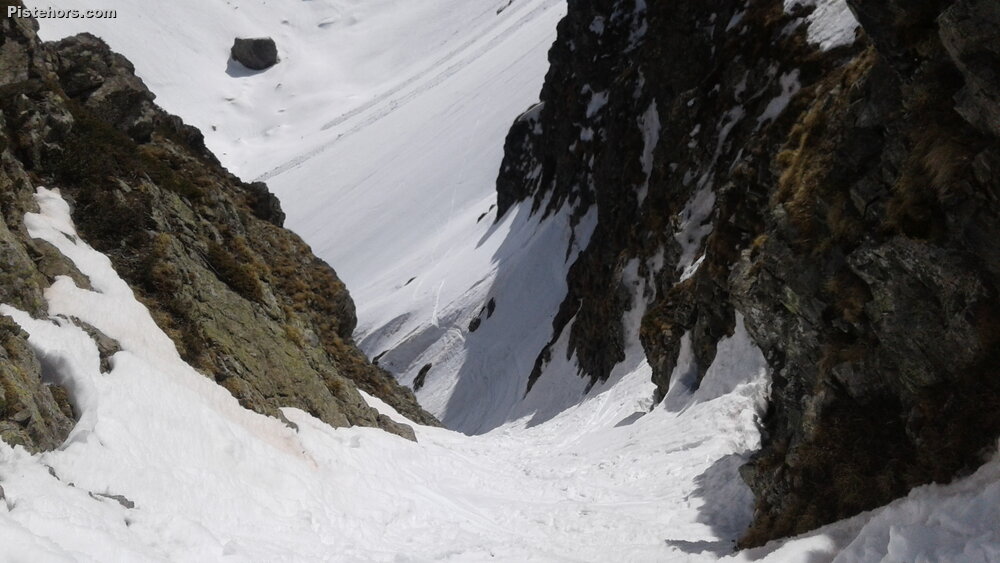 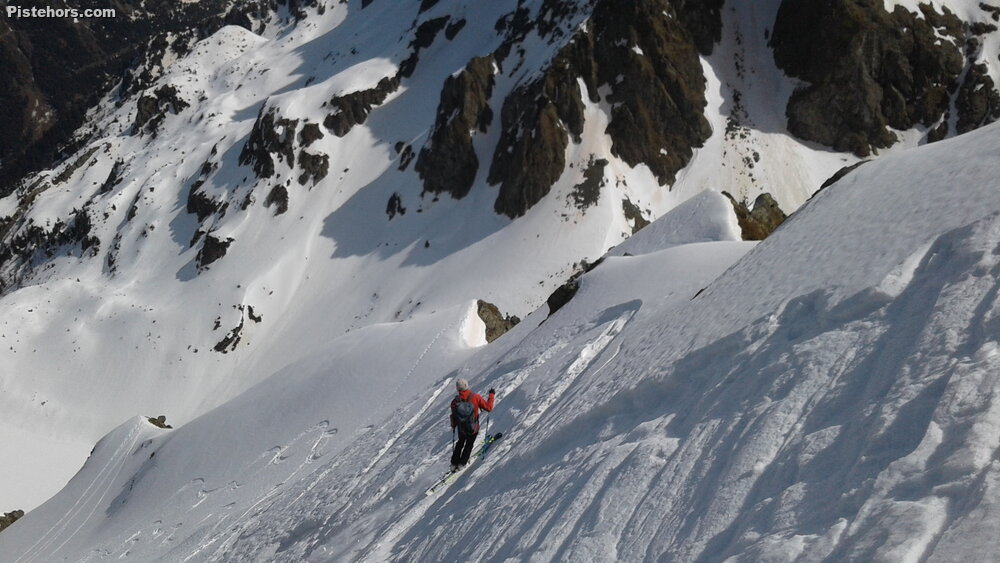 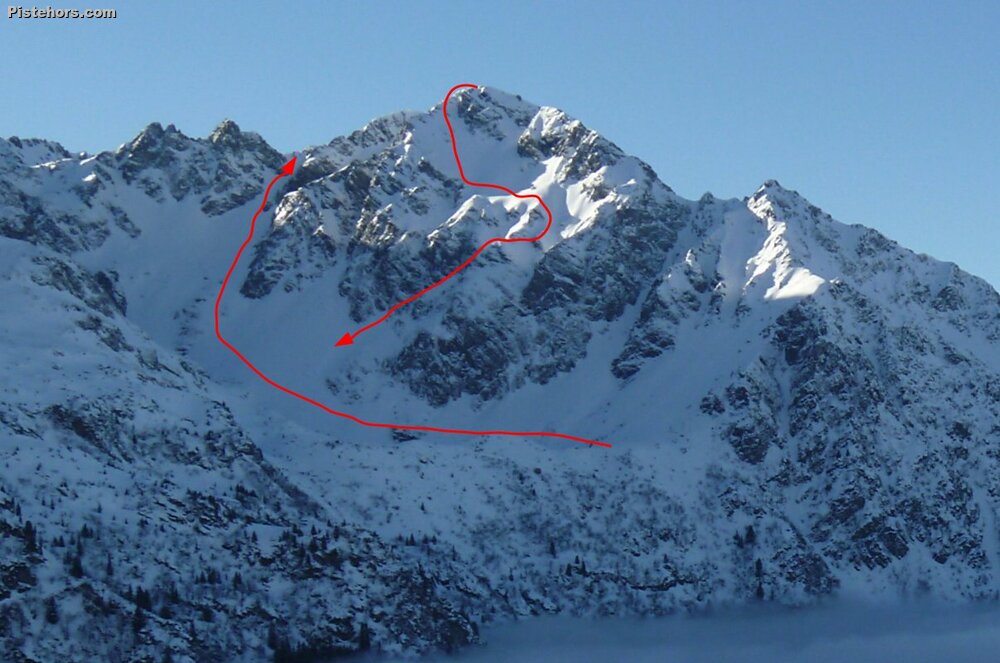