If you enjoy the peace, quiet and savage beauty of the mountains then the Val d’Aran is somewhere to cross off you list this winter. However if you like shreddin’ the gnar and don’t care too much how then Spain could be a new destination. The Catalonian government has just authorized heliskiing in the area. Two companies will be running trips Pyrenees Heliskiing and TAF Helicopters. 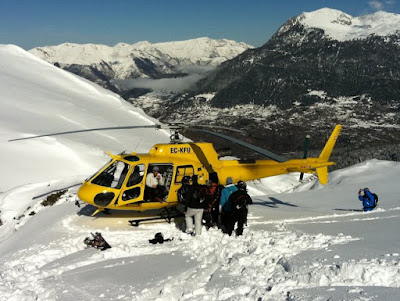 Previously heliskiing in the Pyrenees had been restricted to the tiny principality of Andorra, jointly governed by Spain and France. There you would cross spatulas with heliskiers, 4x4 and skidoos all in a days skiing. Pyrenees Heliski, who has previously operated in Turkey, has been hit hard by new taxes on heliski operators in that country. The Catalonian decision will certainly be welcome news.

According to government representative, Carlos Barrera, heliskiing in the area has been authorized due to “market demand”. One wonders what else the Spanish will authorize on that basis? Joan Carol, director of corporate development said TAF Helicopters had four criteria: respect for the environment, safety, quality and economic sustainability. 7 areas have been authorized for heliski flights. Pyrenees Heliski will be charging € 290 for a half day with two rotations.

ps thanks to http://www.skitour.fr for the heads up on this story

"TAF Helicopters had four criteria: respect for the environment ...” - I find a contradiction in this criterium.  Helicopters never were an environmentally friendly mod of transportation.

It is a shame that we loose pristine mountain environments because of a greedy desire for more money.

I found that pretty odd too, you’ve got both noise and air pollution

The air pollution isn’t great but the real issue is noise and disturbing wildlife habitats. This is massively at odds with other parts of Europe where we’re trying to minimise the impact we make as ski tourers and snowshoers in winter.

There also an egalitarian issue for me, skiing’s restricted to people with deep pockets already. A bit of elitism where only people who can walk up get there is no bad thing.

Very odd.  I skied with these guys in the Val d’Aran a couple of years ago, and I’m sure they have been operating for a decade or so serving the well healed Spanish who frequent the resort.

That said, the Val d’Aran is a lovely area with a strong back country & ski touring scene and the operation is small.  However if more companies pitch up, not good.

in fact, they are offering this service at least the last two years, ... as you know: “spain is different”

they say that are going to avoid a slope if they see skiers doing rando there… but once we found them in the same valley (TAF company). We “enjoied” the helicopter fly over our heads - really close - crossing the group during their several runs over our itinerary (that day, the avalanche risk was 3 but comming from a 4 the day before)
.. of course, all the slopes were plenty of tracks.. I still remember how the said goodbye “ok folks, we go for lunch, we leave all the valley for you!”

Pyrenees are too small for these activities. Probably the same in Alps. Our landscape is not so huge as Canadian mountains.

And what about the risk of avalanche? Pyrenees, specially south face, do not have “safe” “tree lines” as in Canadian moutains, or Alps moutains. May be in Aran two or three weeks each winter.

Sad news for the delicate valleys of the Pyrenees