People have been flocking to the French mountains despite the curfew, closure of ski lifts and restaurants. It is a similar phenomena to that observed in the summer when, post-confinement, people wanted to just get out into the fresh air. Car parks have been full to capacity with long lines to buy cross country ski passes or to rent nordic gear.

Focused principally on one week stays for downhill skiing the big French ski areas have had trouble benefiting from this rush to nordic activities. Over Christmas the occupancy of hotels and rental apartments was just 25%, down -70% compared to the same period last year and the picture looks very similar for the upcoming February winter holiday period. At les Deux Alpes reservations are down a stunning 85% for February.

Mid mountain areas, especially with a strong Nordic (ski nordic, cross country, snow shoeing, dog sledding) presence have done better. The Massif Central is -26% for February, -7.5% for the Vosges and reservations are even up in the Jura at +4.6%. There would be even more visitors if restaurants had been allowed to open or serve on the terraces. 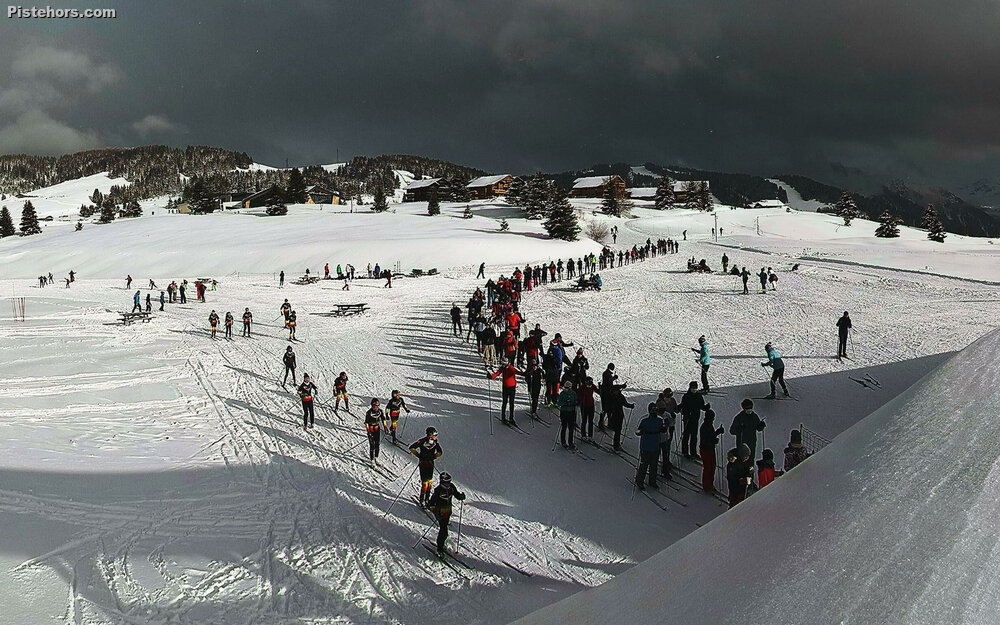 Queues for the Nordic Ski area at les Saisies

In the Catalan Pyrenees visitor numbers were only down 30% at Christmas with people spending money they would have used on lift passes in the shops or on other activities. Ski touring has been a big winner. At les Angles it was impossible to find a pair of touring skis to rent during the holidays. Capcir, which has no downhill skiing, has noticed more French visitors but numbers are stable… at 100% occupation. Overall things look less satisfactory for the Pyrenees this February with occupancy rates down 60%.

All of this has an economic effect. Three quarters of season workers are unemployed this winter. Economic activity, including restaurants (closed except for takeaways), ski lifts and ski hire is down 80%. At the same time there are not enough instructors and guides to cope with the demand for ski touring and cross country skiing. One hire store had rented all their touring skis (8 pairs) and said they could have hired double that number but the cost of ski touring gear (around 500 euros trade price for skis and skins) compared to alpine rental gear (100 euros per pair) meant it wasn’t economically attractive in normal times.

The return to nordic activities and good snow conditions has benefited mountain resorts close to population centers most. Cross country ski areas and snowshoe trails are open and people have been experiencing other activities such as fatbiking, dog sledding, sledging and just walking in the mountains. 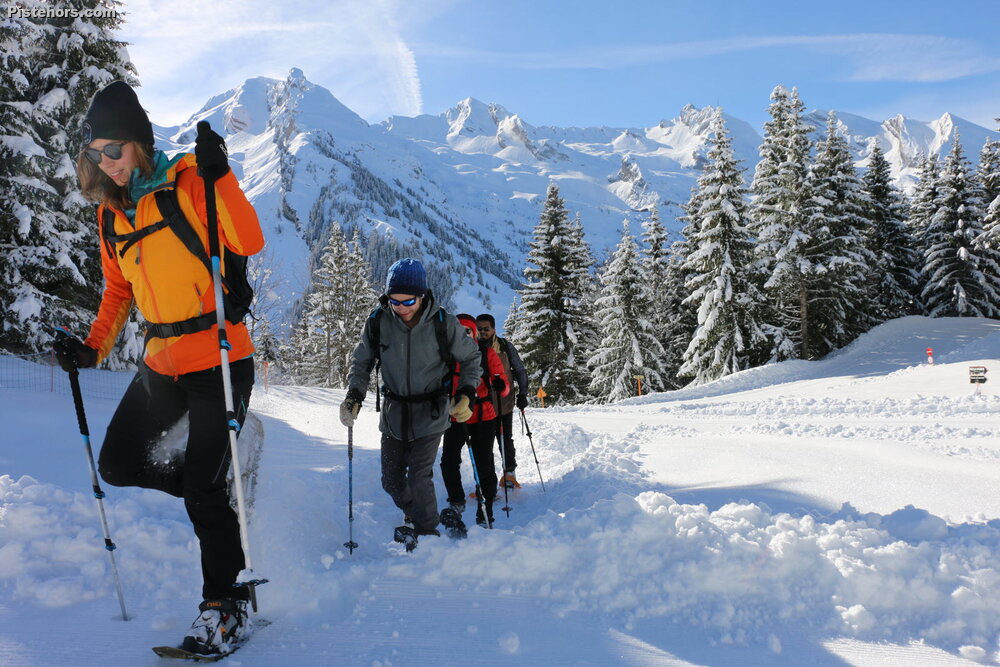 The Haute-Savoie snowshoe maker TSL is submerged with orders and finding a pair for sale in the shops or second hand is an odyssey. TSL (Thônes Sports Loisirs) manufactures nearly all the parts in France so are not dependent on Chinese supply chains. A big advantage with the communication problems brought by the Covid emergency. The business was founded in 1981 at a time when snowshoeing was out of fashion. In France they had to almost create a market from scratch. Today 10,000 pairs of snowshoes per week leave the factory gates. Sales are up seven fold in North America. The company had to double its staff to cope with demand. They’ve mainly recruited from people who are out of work due to the lockdown: ski instructors, hotel and restaurant staff and the factories are working double shifts. Still it is not enough, the company has orders for 30,000 pairs of snowshoes to deliver.

The Hautes Alpes are seeing an exceptional year for Nordic Activities. Yvan Chevalier director Ski Ubaye has said that cross country skiing is up 100%. Overall turnover for cross country ski areas is up from 130 000 euros in 2019 to 190 000 euros in 2020 including the 15 day Christmas period. 2021 should be even better according to Thibaut Siméon, director of Nordic Alpes du sud. Dog sledding, snow shoeing have also been doing well. 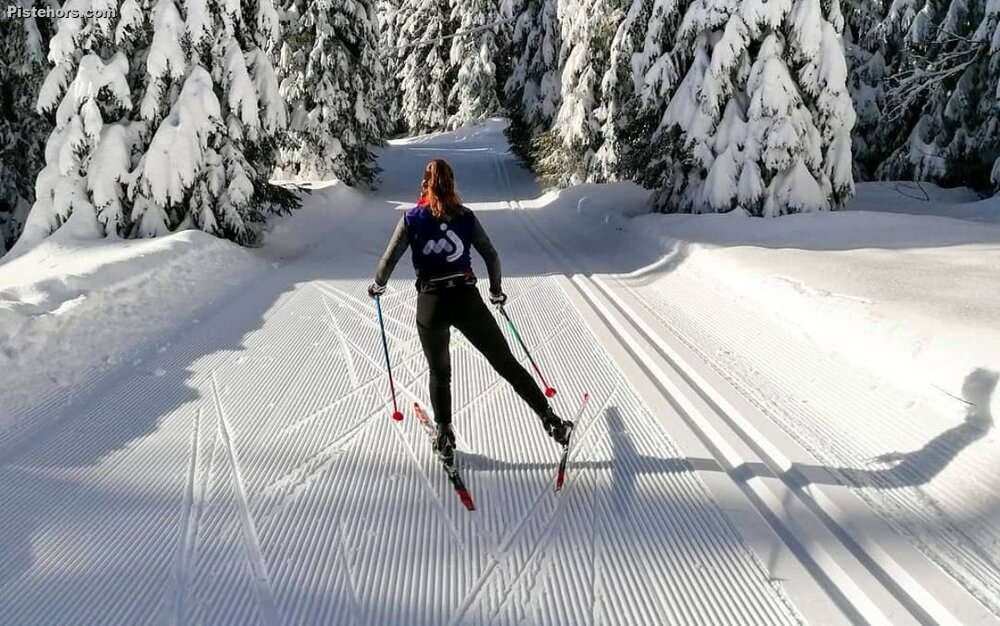 Cross country ski conditions have been excellent this season

Same picture in the Isere where most of the Nordic ski areas have already overtaken their turnover for the whole of last season. Visitor numbers at Chamrousse Nordic Park (principally cross country skiing and snow shoeing) were up 24% over Christmas. The Col de Porte in the Chartreuse say they are about 50% up on average. Autrans had a turnover of 375Keuros last season. This year they have already taken 442Keuros. At l’Alpe du Grand Serre, with just 20km of cross country runs, they think 2021 will break all records but the figures are tiny compared to receipts for downhill skiing.

There are clouds on the horizon. The last week has seen rain over 2000 meters and springlike temperatures. Most French cross country areas are around 1000 meters altitude. There is also the threat of another tight lockdown. France has already experienced two long periods where sport was only allowed 1km from home and for 1 hour.

The Covid crisis has illustrated that, contrary to the lobbying of the alpine ski areas, a certain segment of the population can adapt to the lack of ski lifts and that there is a real demand for non alpine skiing activities in traditional mountain villages. It remains to be seen if this “back to roots” movement continues next season. Locals, at least, have discovered another aspect to the mountains. With climate change a medium term worry this season should give big and small ski areas some food for thought.