A number of mayors have taken the decision to impose a temporary ban on ski touring in their communities. In the Isere department les 7 Laux, le Collet de Allevard, Chamrousse and Lans en Vercors have taken out temporary bye-laws to ban winter activities until at least the 18th of December 2020. The laws have been introduced following a strong recommendation by the prefecture. The authorities are concerned about accidents following the recent fresh snow. At le Mont Dore in the Massif Central region all activities are banned until further notice due to the "bad weather and avalanche risk". The mayor of Monêtier-les-bains has reversed a decision to ban winter sports enthusiasts from the Serre Chevalier area but has warned people that until the 7th Jan 2021 they do so at their own risk. At la Clusaz in the Haute-Savoie the Balme and l’Etale sectors are out of bounds for ski tourers. Mayors are responsible for security in their communes and risk a manslaughter charge if there is an accident. 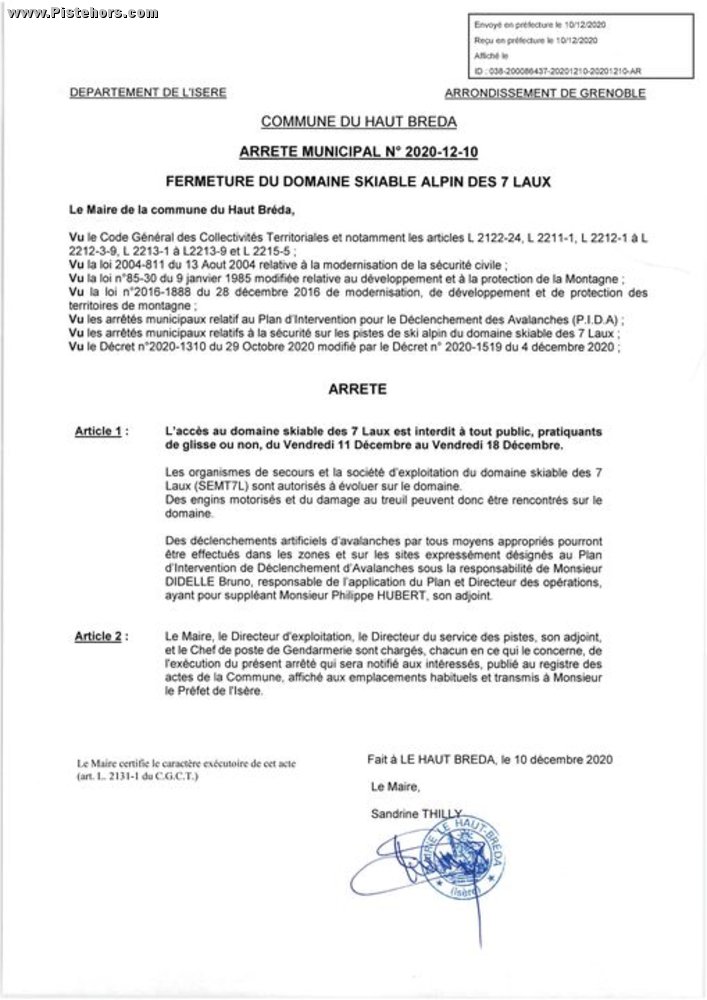 On Thursday a number of minor accidents involving slabs were reported in the 7 Laux ski area triggered by ski tourers. There have been skier triggered avalanches in the Tarentaise and Vanoise (on the PWL reported earlier by Pistehors) and in the Ubaye. Since then 30-40cm of new snow has fallen accompanied by strong winds from the North-West. At altitude there are weak layers buried in the snowpack that can be triggered by a single skier or snowshoer.

The head of the Alpes-Maritimes Gendarmerie has warned that there will be controls of anyone heading into the mountains this weekend who doesn't have the correct paperwork. The PGHM (Mountain Rescue) for the area are worried about the number of people buying ski touring gear "we've already had to rescue two people who were lost in the mountains, people need to be back home by 16h30 at the latest, night is early at this time of year and in the ski areas there is the risk of control work or piste bashing".