The body of an Italian ski instructor, resident of Brides les Bains and missing since Wednesday has been found at 2200 meters altitude in the Vizelle sector of Courchevel under a meter of snow. Victim of an avalanche. The alert was been given on Wednesday evening when he failed to show to pick up his son from school. The search and rescue were able to localize his phone but had to call off the search around midnight due to the conditions. He was found by a probe search this morning around 10h00. 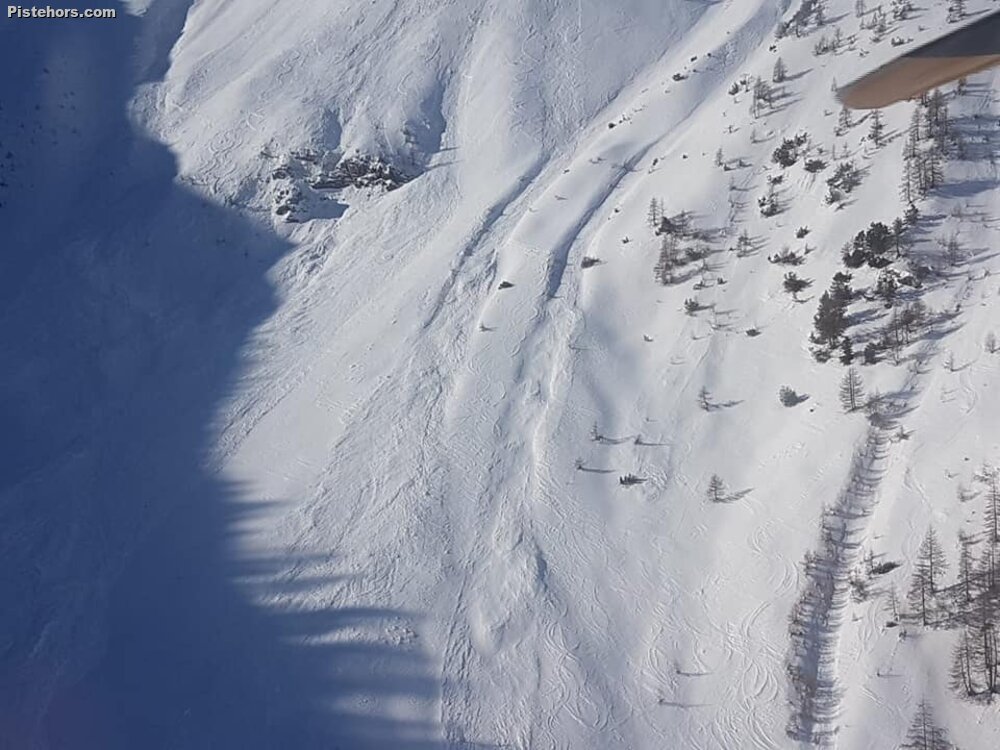 The avalanche risk was ⅘ on slope aspects and altitudes with 50cm of snow falling over the previous 48 hours. The bulletin warned of very unstable conditions with large avalanches mobilizing a lot of snow possible. It advised extreme care with backcountry travel. This is the first avalanche death in the Savoie this season (the ski lifts are closed to all but club groups) and the second in France.

There have been a series of incidents over the last few days. A consequence of fresh snow, high winds drifting snow and warm temperatures on south facing slopes.

Two ice climbers had a narrow escape on the 13/01/2021 above Saint-Dalmas-le-Selvage in the Maritime Alpes. Hit by a snow slide they were saved by their climbing protection. The Mountain Rescue overflew the scene and said the slide started at 2500 meters altitude on the south slopes of the Croix de Carlé and descended 800 meters downslope. The climbers were not equipped with avalanche beacons. A spokesman for the rescue services said "there is a temperature inversion, it is cold in the valleys but warm at altitude, we've seen other natural avalanches in the area, they are a consequence of the temperatures and snow accumulations".

On the same day two ski tourers were hit by an avalanche on the North-East face of the Grande Autane near Orcières. They were only partially buried by the slide. The mountain rescue services from Briançon came to the scene to ensure there were no other victims. The two skiers were able to continue on their route. The mountain rescue warned skiers of the avalanche risk in the sector and said even small slabs could bury skiers with the Grande Autune avalanche debris 1 meter deep in places. They asked that any avalanche victim to inform them of the slide even if they did not require outside intervention in order to avoid long and extensive searches later.

On Sunday three ski tourers were hit by a natural snow slide in the Belledonne mountain range above the Riviers d'Allemont. The avalanche, a natural snow slide happened at 13h30 at around 2100 meters altitude on a South-East slope aspect and followed the stream bed of the ruisseau de la Jasse.

The group, which had stopped in the stream bed, were carried 200 meters down-slope but were able to activate their avalanche airbags. Two of the group remained on the surface of the slide. A second avalanche then covered the group. One of the skiers was able to free himself from the slide and with the help of eye witnesses rescue the other skiers. The rescue services were called at 13h45, unable to land at the scene they arrived around 14h30. By that time the last victim had been freed after some 45 minutes under the debris. His airbag had formed an air pocket. Unconscious and in a state of mild hypothermia he was airlifted to hospital arriving at 15h30 and was able to be discharged later in the evening.

The avalanche risk was 2 (Moderate) but had warned of the possibility of this type of avalanche.