From Bourg d'Oisans to l'Alpe d'Huez. 21 hair pins. 13.2km. Start at 744m, Summit 1815m. Average gradient 8.1%, sections of 12% over 100 meters. At the T junction for l'Alpe d'Huez take the left to continue through the village, under the ski bridge then first right to the Bergers roundabout and left to the finish below the DMC left.

"la mythique", it is was they call the 21 hairpin bends that snake their way up to the ski resort of l'Alpe d'Huez from the town of Bourg d'Oisans. Of course there is some snobbishness from bike aficionados who don't see what all the fuss is about and say it is not the hardest climb in the Alps, it is not even the hardest climb in the Isere! The ClimbByBike website lists the newly created Col de la Loze as mainland France's hardest climb and says that Val Pelouse (above Pontcharra) is the hardest Isere climb, although they haven't classified the Col de Pre Long opposite me. L'Alpe languishes at 99th place but that is to ignore the history. You can almost smell the sweat of riders past: Coppi, Hinault, Pantani. It is a magnificent amphitheater of cycling. The coliseum of pro racing.

The climb itself starts on the pan flat valley floor at Bourg d'Oisans and climbs 1071 vertical meters to 1815 meters altitude over 13.2 km giving an average of 8.1% with sections as steep as 13%. There are a whole series of closed to motor vehicle events in the Alps this, and every summer. I decided to tackle l'Alpe on rollerskis.

After a very busy winter I've had a bit of a hiatus. Two 'flu like viruses and a bad back meant I didn't do much sport in July apart from commuting to work by bike. I had my doubts about tackling "la Mythique" but thought I could always stop somewhere en-route if I were too tired. On the Monday I booked Tuesday off work. Arriving at the start just before 9am they were stopping traffic for 2 hours. My aim was to make Huez village at 1400 meters by 10am... ish to allow an hour to climb to the final 400 meters to the ski resort, traverse town and take the 11.10am bus down to Bourg.

At the start there were a couple of guys on skikes - off road rollerskis with fat tires. They were going to double pole all the way to the top. I was on classic skis as was French Team Member and local club skier Thaïs Barthélémy but her friend had opted for skate skis. Skate skis are generally faster but uphill require a lot of strength. With classic skis if you get tired you can fall back to a kind of "skimo" rhythm using the ratchet to stop yourself going backwards.

The skike twins were already out of the gate. I was a few minutes behind and Thaïs and friend were still getting prepared. Joining us were some 1250 cyclists. There was no fixed depart, ideal under Covid conditions. Instead the road was closed at 9 and it was up to cyclists to decide when they'd begin their climb, some people rode up from Grenoble and got on the climb at 10.

The first part of the climb to the hamlet and cafe at la Garde is steep. I slowly gained on the skike boys and caught them at la Garde but in turn was caught by Thaïs and friend who looked well within their comfort zones. The road flattened, I skied behind the two skikes up to Ribot were I stopped for water. A bit of a palava as my botted was in my rucksack. A camel back would have been a good idea and I envied the cyclists who were just reaching for their bottles mounted on the downtube... well not the guy who fumbled his only to see it disappear over cliffs to much cursing. The section to Huez village was pleasant although by now the sun was beginning to beat down. At Huez, or rather Dutch corner, I sought aid from the first aid team for a blister that had developed on my heel and took the chance to drink and have a gel. Climbing up through Huez from Dutch Corner was longer than I remembered and I reached the crossroads below Huez at around 10h30.

It is joked that l'Alpe d'Huez is Holland's highest mountain and the Dutch were certainly dominant on stages in the Tour de France's of the 70s and 80s with wins by Joop Zoetemelk, Hennie Kuiper, Peter Winnen, and last but not least Gert-Jan Theunisse. The Dutch have retained a special affection for l'Alpe and today was no exception: old, young, kids, male, female, race bikes, shopping bikes, e-bikes all were on the climb. A couple of Dutch guys at the finish said it was the hardest thing they'd ever done in their lives. For them the myth is real.

The final bends looked as intimidating as ever and I began to catch cyclists, some of whom had got off to walk. The road was a bit rough from here which slowed me down, I climbed in the center to find the best tarmac - ideal with the closed roads. Finally the last hairpin, #1, I didn't even see who it is dedicated to, Coppi maybe? No, il campionissimo watches over hairpin 21 that greets you on the climb. I rounded the bend and could see the church, not too far off but the gradient ramped up again into the village. Then finally a big group of non-Covid compliant cyclists blocking the road, high fiving, talking of their climb, getting refreshments provided by the organizers. I grabbed a musette but made my through and along to les Bergers to wait for the bus down.

On the way down I noticed the two skike boys, they had brakes mounted to their rollerskis and were hooning down the mountain as fast as our bus. Back in the day the bus would have to back up and negotiate each hairpin with a 3 or 5 point turn, 7 points if it was really tight. Now the driver just has to wait for the road to clear. The bends were widened and surfaced back in the pre war period by Joseph Paganon who dreamt of linking l'Alpe d'Huez through to Laval close to Grenoble with a road that would cross the Pas de la Coche above Allemont. The second leg was never completed, the road to nowhere stops in the Belledonne mountains 3km short of the pass. 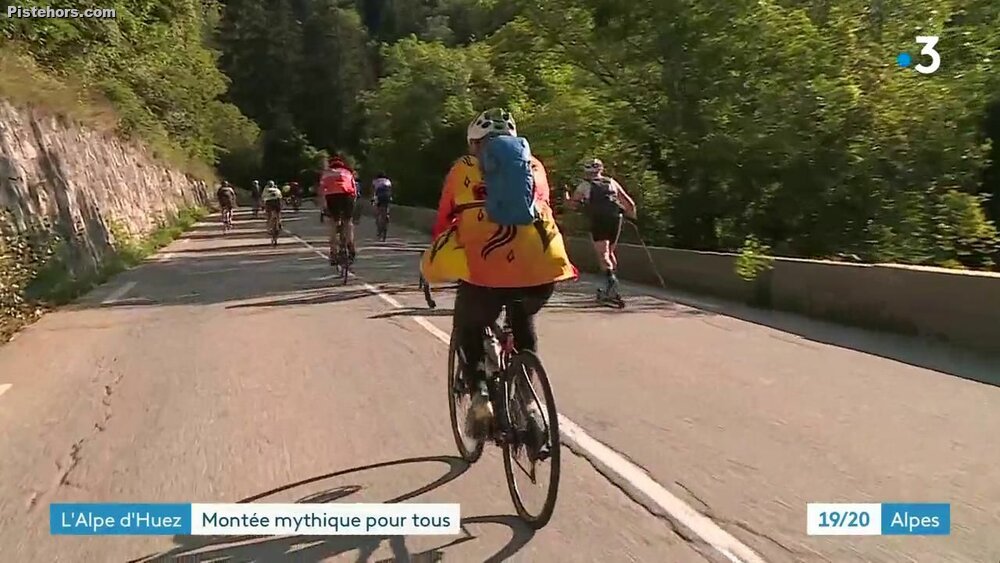 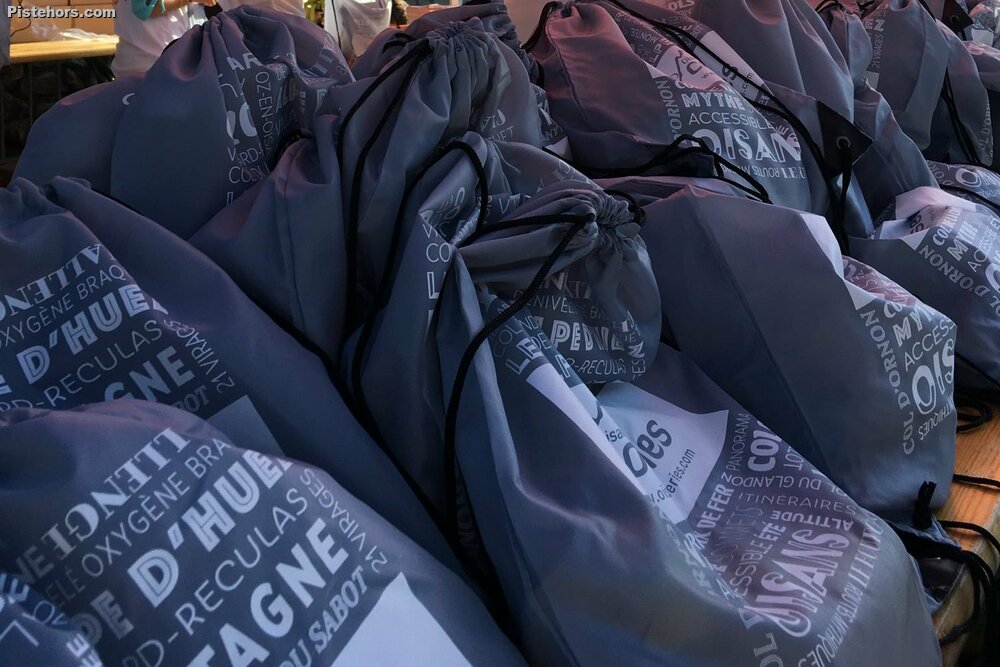 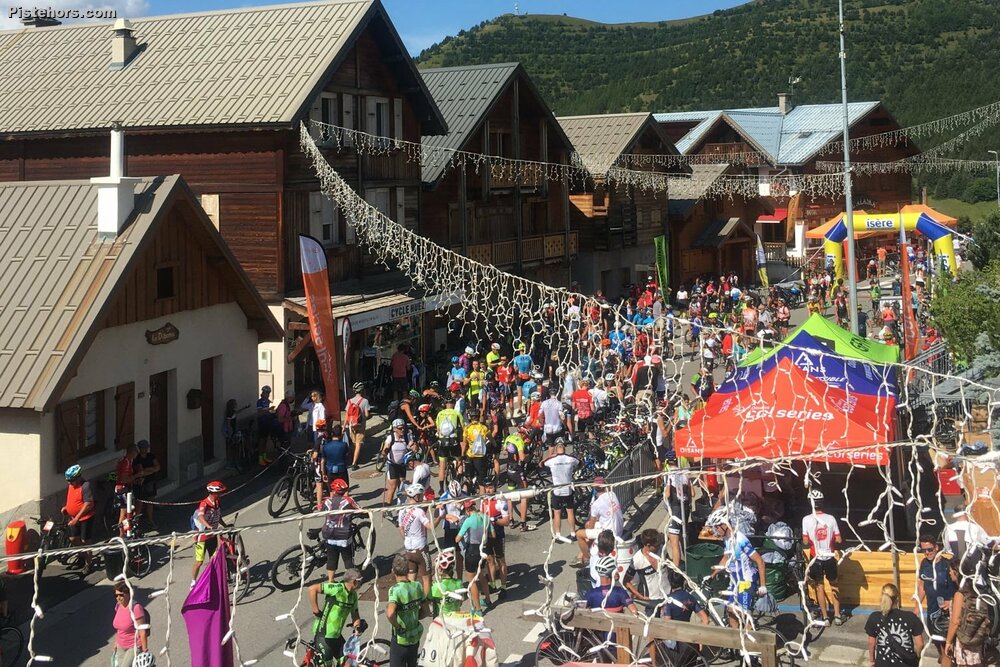