Risk levels and the Aravis Avalanche

Some people, including me, were surprised at the size of the avalanche in the Grand Crêt bowl above la Clusaz on Saturday. Given the number of people climbing this popular route at the time it was fortunate there were not more victims. The slide was 100 to 150cm deep and measured 150 meters wide. Certainly a big slide for risk 2. It ran 500 meters where it buried a ski tourer climbing the normal route to the Tête Pelouse. Unfortunately he did not survive.

It is worth remembering that risk 2 isn’t a low but a medium risk. The level says there can be “large avalanches in isolated areas” and that “Human triggered avalanches are possible” even if natural avalanches remain “unlikely”. Backcountry travellers should “evaluate snow and terrain carefully” as there is a “heightened risk of avalanche on specific terrain features”. That sounds altogether more alarming. It should also be remembered that 8% of fatal avalanche incidents occur at risk 2 (29% in nearby Switzerland). 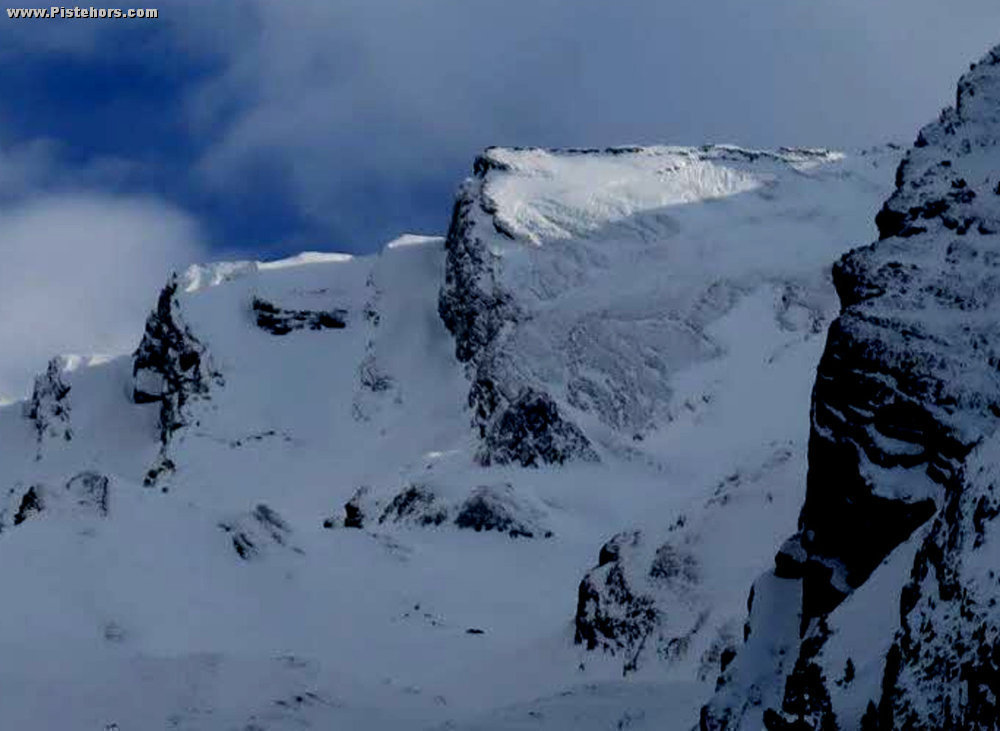 Tête Pelouse, avalanche fracture is visible in middle below the ridge

Saturday’s slide triggered close to the ridge line on the Tête Pelouse (2537m) on a north to north west facing sector. In detail the Tête Pelouse is a series of flagstone beds tilted at around 40 degrees and these are oriented in a more west to south-west direction. In the photograph you can see the face that slide catches the sun at the ridge-line. The avalanche took the entire snow-pack down to rocks. We can assume it broke on the layer of depth hoar (gobelet) formed at the start of the season. The debris was large, solid blocks. The victim was completely buried but was rescued quickly by eyewitnesses using his avalanche beacon.

This is what the avalanche bulletin had to say for Saturday in the Aravis:

Stability of the snowpack
Still some weak layers buried in the snow-pack. In between graupel from the 19th January but not everywhere. At the base, old snow from the start of the season, in particular, weak crystals above 2200/2300 meters.
Lower than 2200: rare full depth slides can trigger from a steep, grassy slope or cliffs at any time on SE to W aspects. Occasionally a large volume from 2000 to 2200 meters.
Above 2200/2400: rare hard slabs, can trigger due to the passage of a number of skiers or a cornice fall on steep NW, N NE slopes. Variable thickness, the wind has formed major irregularities. The weak layers are comprised of sugar snow.

Certainly the slide in the Grand Crêt is covered by those conditions. Was it natural or skier trigged? Was it triggered by the skier himself (remote triggering) or by a group above? Remote triggering over such a distance and with the terrain features, with risk 2, seems very unlikely.

Skier triggered from above? Chamonix guide Christophe Cordonnier noted a that a skier triggered a slab on a nearby slope at the same altitude the day before.

The rescue services said the slope in question had been wind loaded by snow from strong southerly winds the night before the incident. They suspected a natural avalanche due to the extra load of this snow. The avalanche forecaster for the Aravis, Gilles Brunot, made these comments.

“From the evidence available, the photograph from the DL and the nivological circumstances one can state that it was probably a slab resting on a persistent weak layer formed during the clear weather in December. It was not a ‘full depth slide’ even if the slab took the snow down to ground level but a slab that broke at ground level because this is where the weak layer was situated. The slide was not linked to temperature. It is a the type of slide that is common at the start of winter”.

So what about this weak layer? The recent conditions were of old, consolidated snow sitting on a hard ice crust above gobelets. To a casual observer all seems more or less solid. Guide François Hivert was in the Beaufortain on the Friday and made these observations:

“This mountain range has seen similar conditions to the Aravis since the start of winter. A long, dry December with considerable snowfall in the first weeks of January. At 2400 meters the the snowpack is 65cm deep. The first 35cm are comprised of fine grains from the recent snowfall. It hadn’t snowed for a week and this old layer had been subjected to a medium temperature gradient and had started to metamorphose into faceted grains (a future weak layer). Below was an ice crust at least 1cm thick. To finish, below the ice crust are large facets with gobelets clearly visible in the upper part of this layer (large hole in the snowpack photo ) just below the ice crust with more gobelets at the base of the snowpack.

We have a really large weak layer that will hang around all winter. In addition, this weak layer is not deeply buried. Remember a skier has an effect on the first 80cm of the snowpack there are real risks that if the forthcoming snowfall (On Sunday 31st Jan) is less than 60cm the additional load of the new snow along with the pressure of a skier could collapse this weak layer. The avalanche bulletin is 2 on a scale of 5 but this is not sufficient. You have to adapt to the conditions in real time. This slope didn’t see my skis this morning, it was untracked, but for how long?”

François’ comments are a clue as to why the risk went rapidly to 4 with the fresh snow on Sunday. Faceted snow near the surface and two lightly buried weak layers. With the extra load the conditions are potentially dangerous and until the weak layers identified by François are buried sufficient deep that they are no longer sensitive to skier triggering they will remain so. In this respect a line in the avalanche bulletin is worrying: “Variable thickness, the wind has formed major irregularities” this means that there will be hotspots on any slope where the weaknesses are not deeply buried, hit one of these and the weak layer under the whole slope can collapse taking all the snow with it. That is, until we have a meter or so of fresh snow on top.

Fatal incidents compared to risk level over the period 1996-2006, French and Swiss figures.

Note there is an ongoing effort to harmonize avalanche bulletins in European countries with a well established definition of the risk levels. France has also introduced a finer grained per range bulletin. So these figures are somewhat out of date.