5 soldiers killed by avalanche in Valfréjus

Five soldiers have been killed by an avalanche in Valfréjus in the Haute-Maurienne, six other members of the group were injured. The victims were part of a group of over 50 soldiers on exercise under the col du Petit Argentier (2599m). 13 members of the group were buried by the slide. The avalanche risk was 3 (Considerable) and the slide was on the north-east side of the the Petit Argentier.

It appears the group were ski touring in the Pas du Roc sector. A first group reach the col when a large slab, 100 meters wide, broke away from the ridge hitting another group behind the leaders. Five dog handlers as well as members of the mountain rescue services and piste patrol from the ski resort came to the scene. The resort was closed following the alert to free manpower. The rescuers were assisted by 2 police helicopters and a private helicopter. The avalanche bulletin for the sector has warned that a single skier could trigger a surface slide that could then take several layers in the snow pack down to 2 meters deep. The risk is particularly acute over 2200 meters altitude. The group were part of the French Foreign Legion. In February 2012 five members of the same regiment were caught in nearby Valloire, killing one soldier. 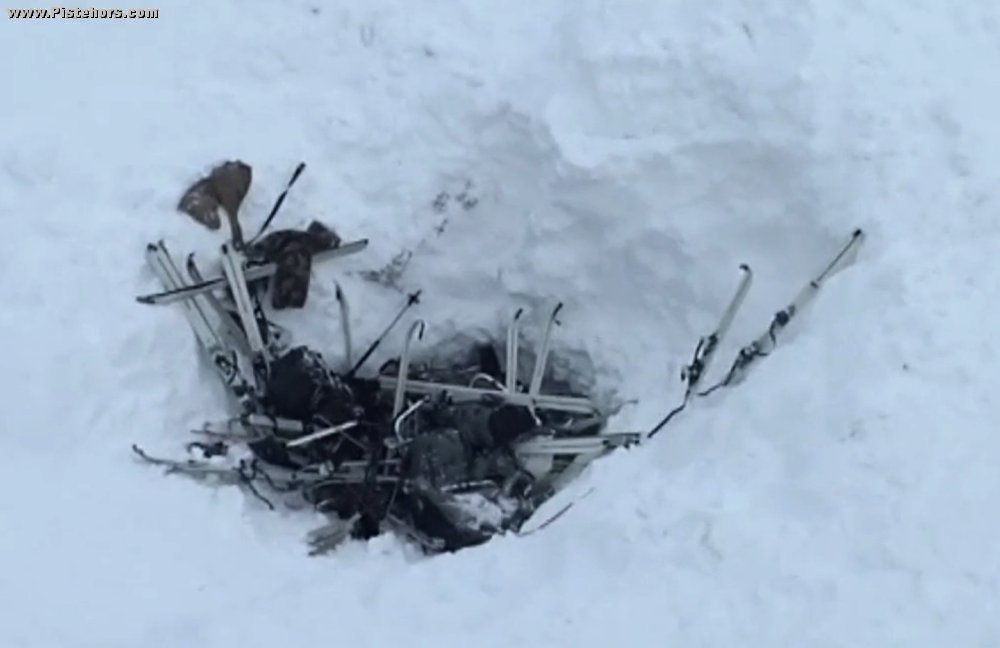 Abandonned skis at the avalanche site

There have been a number of less serious incidents over the last few days. On Sunday an avalanche at Les Menuires covered the open red David Douillet piste hitting but not injuring a skier. On Saturday afternoon a large avalanche triggered by skiers crossed the closed Cibouit black in Serre Chevalier and at les Orres two ski tourers Tête de la Mazelière triggered a slide close to the Rocher Marcelinas. One of the skiers suffered back and hip injuries. He had activated his avalanche airbag. The two ski tourers were mountain professionals.

On the 15th January 2016 the ANENA (French Avalanche Research Institute) issued a general avalanche warning about off piste, noting:-

The ANENA called on all back country travellers to think seriously about route choice and apply basic rules such as group spacing, safe stopping places and care with other slope users. They called on anyone going off piste to wear an avalanche beacon.