The end of the 2014/2015 French ski season was better than the beginning, at least in terms of snow cover. French ski lift operators group Domaines skiables de France (DSF) is reporting a drop of 3% in the number of skier days compared to last season and with just a handful of high altitude resorts still open not much will change by the end of the season.

The poor snow cover over the Christmas and New Year period below 2000 meters hit ski resorts hard. The run up to the main February holiday period saw good weather and conditions and the European school holiday dates also helped resorts. Logically it was the very big, high altitude ski areas that withstood the lack of snow. Other ski resorts saw a more pronounced drop of 5%.

Suprisingly the Vosges saw 36% more skiers than last year (not great for the range) and was up 2% over the previous 4 years. The skiers are very reactive when the snow conditions are good. The Massif Central was up 6% and the Jura 3% over the last 4 years. However these areas are too small to have much of an impact on the overall figures for France. The Isère/Drôme was down -1%, the Savoie -2% and the Haute-Savoie -3% over the previous 4 years and the Alpes du Sud saw a record -9% drop over 4 the 4 year average.

The Savoie wasn't helped by poor road management on 3 of the transfer weekends. The Pyrénées had similar problems with access to the resorts paralysed by snowfall with a -2% drop in skier says over the 4 year average. It remains to be seen if France can recover its No.1 status in a battle royale with Austria and the United States. The US West Coast has also suffered a very poor season with many resorts closing in March due to a drought. 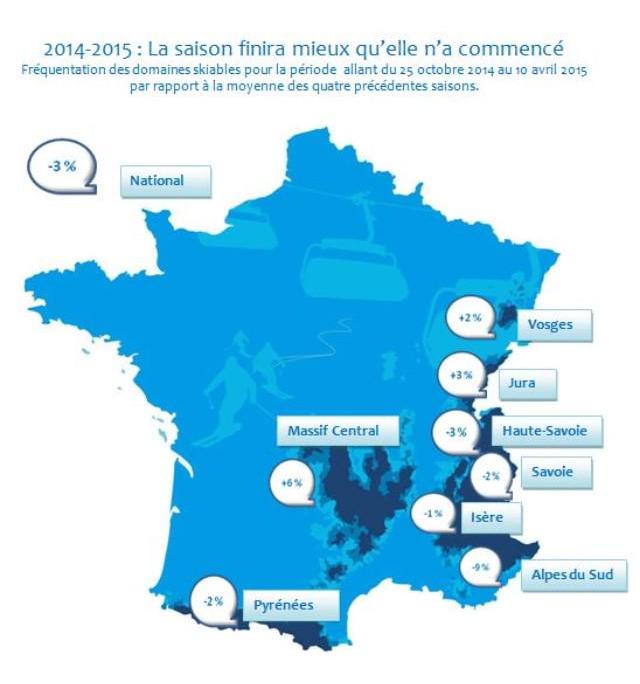