50,000 cars on the road and fresh snow have combined to make one of the worst transfer days in the last 20 years leaving thousands stranded across the French Alps in their cars and at airports. The authorities took emergency measures this evening opening school halls from Bourg St Maurice down to the alpine towns of Chambery and Aix les Bains but bedding and food was in short supply.

The weather system has been pretty much predicted for the last couple of weeks with timing firming up over the last few days. The Savoie prefecture held a crisis meeting on Friday discussing how to deal with the perfect storm of one of the busiest transfer days of the season with snow across France, from the plains to the mountains.

The prefect Eric Jalon admitted this evening that they had underestimated the difficulties. He blamed the chaos on freezing rain around midday in the alpine valleys rendering the roads impassable and poorly equipped drivers heading down the mountain this morning causing accidents, each of which took hours to clear. Indeed the emergency services had trouble reaching black spots on the access roads to Valloire, Valmeinier, le Corbier and la Toussuire and those resorts remained blocked all day. French media pointed out that not all tollbooths were open and that snow clearing on the autoroutes had been limited at times. Locals also complained of lorries stuck on the roads.

Early this evening the French interior ministry estimated that 36,000 cars were on the roads in the Savoie today and only 7,000 of those had reached their destination leaving some 29,000 cars stranded. The emergency crisis center in Chambery with a capacity 700 beds filled up quickly and there were said to be no hotel beds east of Aix les Bains.

Police were enforcing a “snow chains” rule for cars climbing to ski stations but the problems were either occurring with cars descending or further down the mountains. Some residents talked of an eerie calm closer to resorts. Over 2000 travellers, mainly British, were blocked at Chambery airport tonight and had to be transferred by coach to three emergency centers in the Aix-les-Bains area.

A jacknifed truck blocked the Vuache tunnel close to Bellegarde and traffic was at a standstill for part of the morning creating huge tailbacks on the main autoroute to Chamonix. Drivers taking the alternative road were barely covering 10km in an hour. Snow chains were in short supply in the region’s service stations. Drivers were reported taking 12 hours to drive from Chambery to their ski resort, if they could reach it at all, a journey that normally takes a couple of hours.

The authorites in the Haute-Savoie issued a warning to backcountry travellers to exercise extreme caution if they go outside of opened trails on Sunday and to consult with professionals: guides and piste patrollers about their plans. The fresh snow, accompanied by winds from the east and north has fallen on an unstable base. The avalanche risk is HIGH in the two Savoies and parts of the Isere and Hautes-Alpes departments. Despite the new snow rocks lie just below the surface.

https://twitter.com/antoinekalaydj - Photo from Antoine Kalaydjian who is in Alpe d'Huez this week. 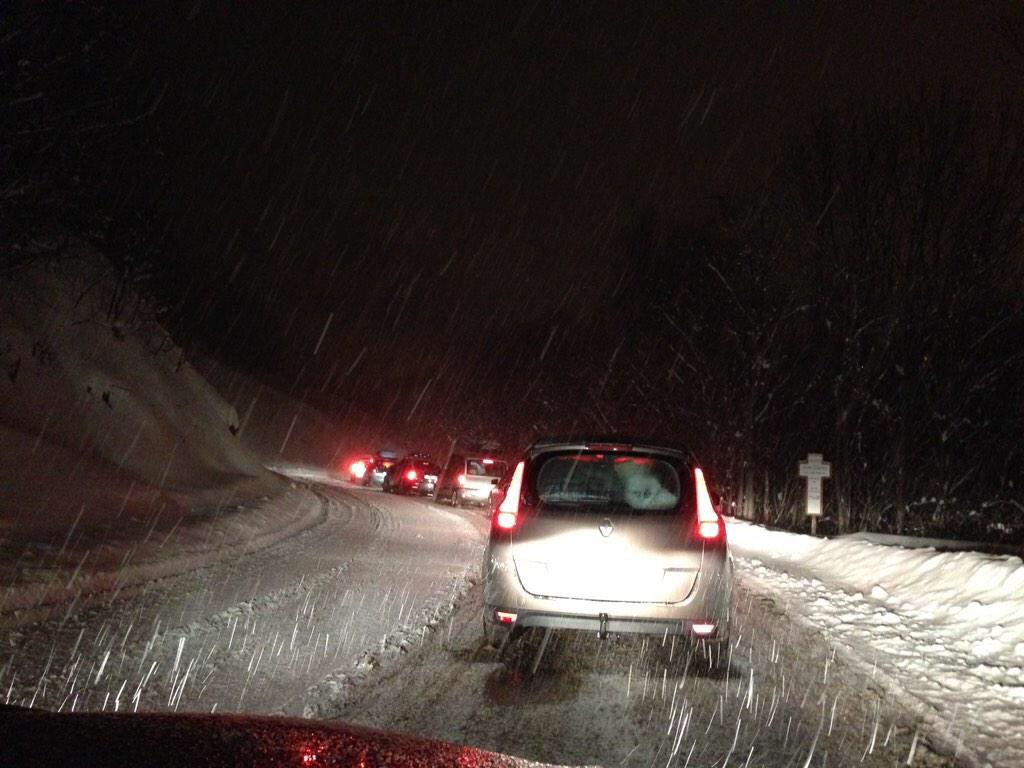