Winter started relatively early in 2013. The first permanent snow fell in the first half of October at altitude with a major storm cycle early in November. At lower altitudes there was some snow at the end of October, about 10-15cm but not enough to ski, with more significant snow cover later in November.

This was followed by almost a month of clear, anticyclonic conditions that transformed the already thin snowpack into fragile hoar crystals. A situation that worried avalanche forecasters. When the snow finally returned in the Christmas week there followed a peak of avalanche incidents. Five out of the twelve fatal incidents in France and seven of the twelve fatal incidents in Switzerland occurred during this week (Period Dec to Feb incl.). It was the deadliest Christmas period for a decade.

The winter was very warm. 3C above average. However there was a lot of precipitation and at 1500 meters snow cover was good from mid January through to the end of March without coming close to the excellent winters of 2005 and 2013. The season saw a number of small falls of snow and this probably accounted for the relatively poor snowpack in wooded areas which were never able to build a solid base. Below 1500 meters conditions were marginal due to the warm temperatures. Ski resorts had trouble running snow making below this altitude due to the temperatures although most low altitude domains were able to open during the Christmas and February winter holiday periods. 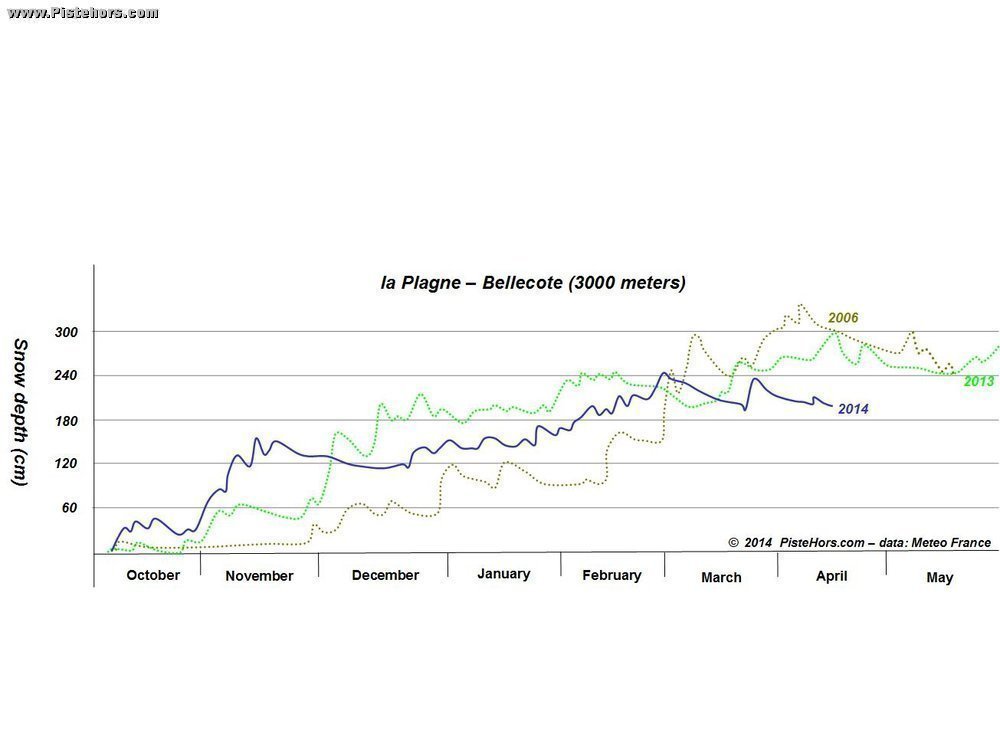 Spring arrived in force during the first week of March and was interrupted by a single storm cycle between the 22 and 27 March in the Northern Alps. Snow cover had pretty much thawed below 1600 meters by mid April. Above that altitude a good freeze-thaw cycle on most days has brought spring skiing conditions in the morning.

The warm temperatures had less of an impact at altitude. There was good snow cover from the start of December and the cover steadily increased during January and February to even exceed 2013 and 2006 for a week at the end of February. In general snow cover above 2000m was better than average during the January to March period. At the time of writing (mid-April) there is still considerable snow at altitude; above average on south facing slopes above 2300/2500m. On north facing slopes there is a 100cm of snow above 2000m except in the central ranges of the Savoie where cover is poorer - some 60 to 80cm. At 2500m there is over 200cm of snow on north facing slopes, excepting the Savoie which again only has 110 to 140cm. 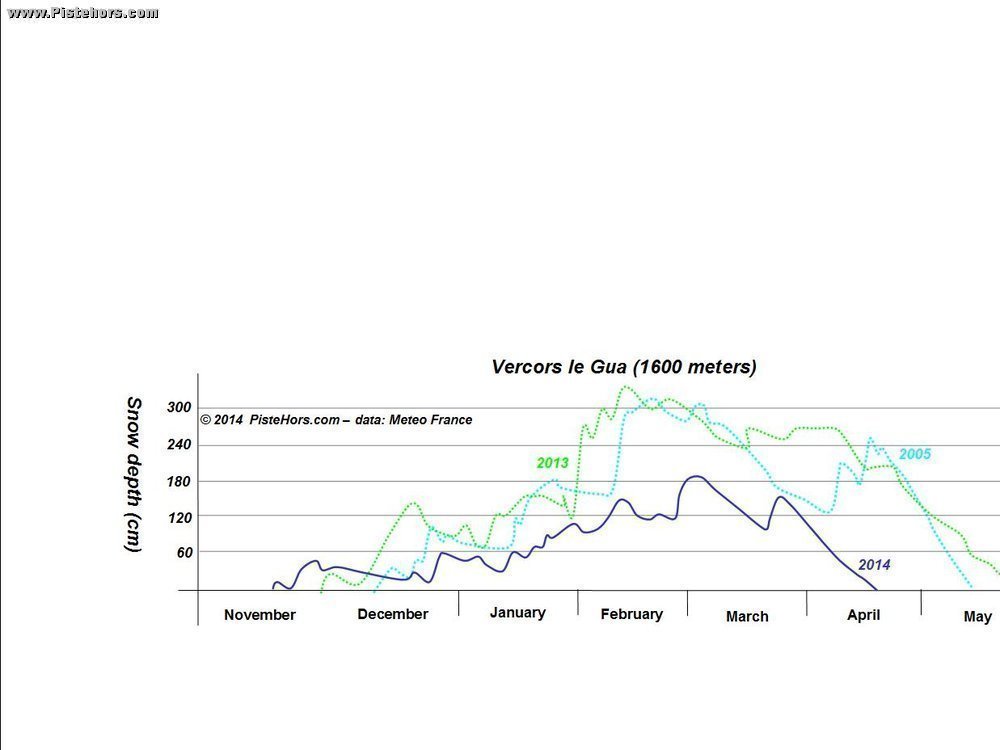 The Southern Alps and Corsica had excellent snow cover with records broken at altitude in the Maritime Alps. The spring thaw has been less pronounced compared to the Northern Alps. Snow cover is average from 2000m on South facing slopes, 1500m on North facing slopes but is above average at altitude. The good snow cover and frequent storm cycles contributed to long periods of high avalanche risk as well as landslides at lower altitudes. At 2000m on North facing slopes there is still 150cm of snow in the Pelvoux, Haut-Var/Verdon and Mercantour, 250cm in the Renoso-Incudine range in Corsica, 100cm elsewhere with an excellent 60 to 70cm on South facing slopes in the Maritime Alps.

Like the Southern Alps the Pyrenees has had a good season despite the current Spring conditions with snow cover currently at 1500m on North facing slopes, 1800m on South facing slopes. The conditions in the Western and Central Pyrenees were better than in the east. Again the winter saw a number of avalanche alerts across the range with some large natural activity blocking roads. Currently snow cover increases rapidly with 100-150cm at 1800m, well above the average of 70cm at this altitude for the time of year. The trend continues at altitude with 300cm at 2200m on shaded slopes, the best values for 15-20 years but well below last winter.

The warm winter was not great for the low lying ranges of the Vosges and Jura. It was frequently necessary to climb on foot from trail heads to find skiable snow. The Massif Central did better with good ski touring conditions from January, ski tourers are still active in the Sancy range at the time of writing.

Overall the winter can be characterised by one of frequent small snowfalls at altitude but often accompanied by strong (foehn) winds with long periods of poor weather. The wind worked the snow at altitude, ridges, summits and the entrances to couloirs were frequently bare or hard snow. The large accumulations at altitude are still a concern for avalanche forecasters. The accident in the Aravis on Sunday illustrates the kind of hazards that ski tourers can face at the end of this season and anyone heading into the backcountry should pay careful attention to the weather conditions and quality of the refreeze.