A series of avalanches across the French Alps this weekend has left four dead as well as a number of injured. The avalanche risk across most of the Alps is 3 (Considerable) at altitude today with fresh snow and high winds forming windslab on a wide range of slope aspects.

Two ski tourers, a brother and sister, have been caught by an avalanche on the west side of the Pointe de Rognier in the Belledonne at around 14h00 today. The sister died later in the University Hospital in Grenoble. The two skiers were descending from the Pointe de Rognier at 2400 meters when they triggered a slab which carried them 400 meters down-slope. The man suffered a serious thigh and knee injury and was unable to come to the aid of his sister. Buried for 45 minutes under just 20cm under the snow she was in a state of cardiovascular arrest when the rescue services found her. After emergency medical treatment she was heliported to Grenoble hospital but succumbed to her injuries in the late afternoon.

The rescue operation involved the PGHM and the Civil Security helicopter from le Versoud and the PGHM from their base in Annecy as well as the fire brigade units from Chambéry. The avalanche risk was 3 (Considerable) at altitude in the range.

There was another skier triggered a slide on the west side of the Crocs in the Vercors range. Carried 550 meters downslope the ski tourer escaped with minor injuries despite being taken over a number of rocks and small cliffs. He lost a ski but actuated his airbag.

A climber (skier) was killed after a crevasse fall in the Vallée Blanche. The victim fell 40 meters when a snow bridge gave way, a second man on the bridge received leg injuries. They were part of a guide led party.

A woman from the Savoy was hit by an avalanche on Saturday just before 17h00. Buried under meter of snow in the Riou Blanc sector close to Névache above the Drayères refuge in the Southern Alps. Wearing an avalanche beacon she was rescued by her husband. Shocked and hypothermic she was taken to Briançon by helicopter for observation. Her 5 skiing companions were also evacuated from the zone.

At Auris-en-Oisans the bodies of two missing skiers were discovered on Monday on the Chapelle off-piste. The Danish skiers had set out on Sunday but the alert was only given on Monday morning. The CRS des Alpes overflew the Signal de l'Homme area and spotted a slide covering the popular route. The bodies were found near the col de Cluy at 2000m altitude buried under several meters of snow.

A 48 year old skier has been killed at Auron in the Martimes-Alps descending a couloir at 2400 meters altitude. The man was skiing with a friend when he was carried 300 meters by the slide in the Dôme sector. There have been two other fatal avalanches in this zone over the last decade. The rescue services from the resort, aided by the PGHM, were able to recover the man in 30 minutes but he had succumed to his injuries. His friend, who was lower down the couloir, was only partially buried by the slide. The man was local to Auron.

A ski tourer was buried by an avalanche at 10h30 this morning in the Vallon Froid on the North side of the Crête d&#39Ane near Saint-Étienne-en-Dévoluy. The slide occurred at 10h30, the man was rescued by the Briançon PGHM and taken to hospital with chest and hip injuries.
http://www.skitour.fr/photos_courses/secours,53703-3.jpg - photo of the rescue

A group of Swedish off piste skiers triggered a slide in Tignes. One of the skiers, a 27 year old man, was completely buried by the slide. Quickly rescued by pisteurs he was heli-ported to hospital by the PGHM with a back injury and hypothermia. Another group at Valfréjus skiing just off piste triggered a slide. None of the group were buried but one had to be taken to hospital with a leg fractured.

Two climbers in their twenties were carried 500 meters after triggering a slide in the Dagobert couloir at Hohneck in the Vosges. The avalanche occurred at 1200 meters altitude. Both men suffered back injuries and one to his face. There is no avalanche bulletin for the range but the PGM warned that "there has been a lot of wind which has created windslab with the fresh snow over the last 48 hours."

On Sunday two ski tourers, part of a ski mountaineering competition, triggered a slab at the Col de Lessines near the ski resort of Chamrousse. The slab was 1 meter deep in places.

Seven Spanish snowshoers triggered an avalanche in the Pyrenees border region in the Enguaneix sector near Puigmal. One of the group was buried by the slide but was quickly rescued by his friends. A helicopter with a dog and handler checked the avalanche for other victims. The Spanish group were able to descend without any assistance.

On Monday a skier was hit by a slide in the Lacs Robert sector of Chamrousse - a sector popular with ski tourers and off piste skiers. The
slide measure 100x200 meters and finished on the pistes. Rescued by her friends the skier was taken to Grenoble hospital suffering from minor injuries.

At la Plagne an off piste skier was buried by an avalanche near the Crozat chair at 2350 meters altitude. The accident happened around 16h00. The 21 year old was found in a state of cardio-vascular arrest and after emergency medical care take to hospital in Grenoble. 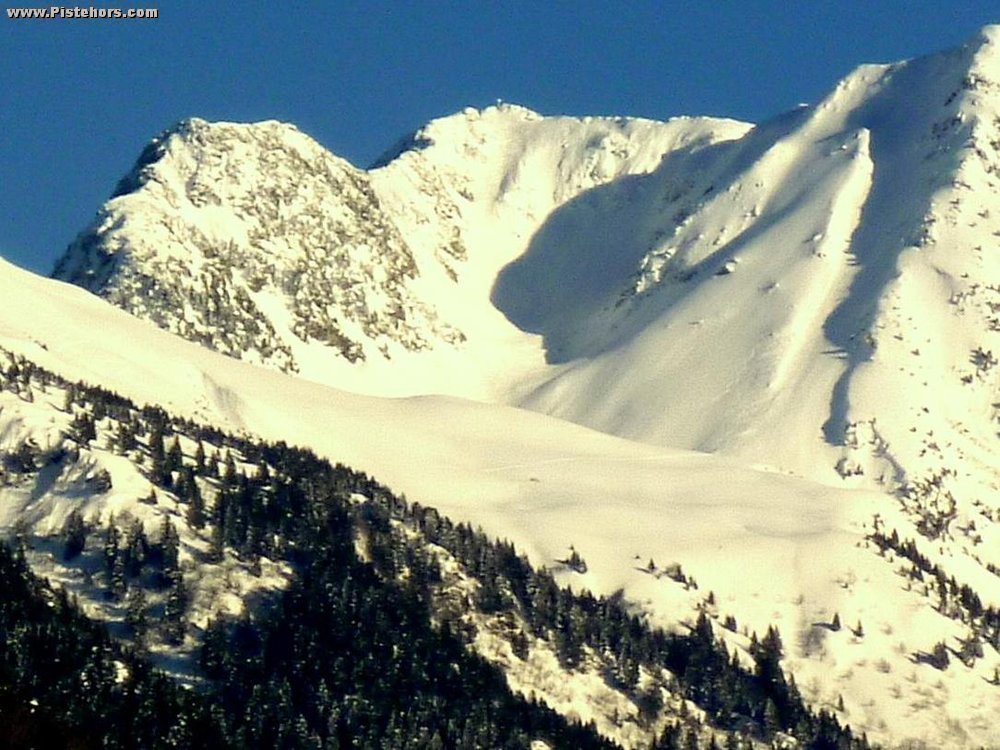