As anyone who looks at the French avalanche bulletins will notice there is a lot of risk 3 (Considerable danger) and risk 4 (High) announced at the moment. What does this mean for off piste skiers and ski tourers?

Naive skiers traditionally think of risk 3 days as some kind of middle ground. "3 out 5 is halfway up (or down) the scale so is probably not too bad and almost certainly means fresh snow." The avalanche risk is calculated by the European weather forecasting services based on the number of avalanches observed, their size and the slope aspects. This information is provided by the ski resort piste services and specialist observers and to some extent from reports in ski networking sites such as Camptocamp.org or skitour.fr

Taking the 5 point scale. Risk level 5 is principally used to alert state bodies about the risk to infrastructure such as roads, public buildings and houses. It means there will be slides down known avalanche couloirs etc. For skiers we should focus on a four point scale: 1,2; 3,(4 and 5). We can see that risk 3 is in the upper half of the risk spectrum. Something to be taken seriously. The scale is not linear but exponential, each level is approximately double the risk of the level below. We could better write the scale as: 2, 4, 8, 16.

In some areas, such as the Haute-Savoie, we see two risk levels announced today. Risk 2 below 1800 meters, risk 3 above. What has happened is that recent high altitude rain and warm weather has stabilized the weak layers formed earlier in the season or slopes have purged. Higher up conditions are colder and this has not happened.

Most weather forecasting services also show a “rose” of slope aspects that are more dangerous. In the winter the colder slopes are generally more at risk of slabs (West, North through to East) because the sun is very low they see very little solar energy. Even if the air temperature is above freezing the snowpack stays very cold. In the spring, or during warm weather, especially in the afternoon it is the East to South to West aspects that have most danger. Already we are beginning to see that we can reduce our risk by choosing the slopes we ski based on this knowledge.

You may notice that sometimes all slope aspects are at risk both at level 3 and 4. So what is the difference between the two levels? At risk 3 we may be dealing more with surface slabs, perhaps the top 30cm of snow. The risk may be greatest approaching ridges and summits or in bowls that accumulate snow. The weak layer may be deeply buried (> 80-100cm) so safe travel procedures will reduce the risk (group spacing, not hucking cliffs onto loaded slopes…). Risk 4 is much more generalized. Large avalanches perhaps a long way from lee slopes.

The basic principles of avalanches are well understood. You need a layer of somewhat cohesive snow (which may just appear to be fresh powder), a slope, usually more than 30 degrees, and a weak layer. The weak layer can be persistent such as hoar or simply the first flakes of fresh snow. The latter stabilize quickly, the former remain in the snow pack, possibly causing problems the entire season.

At risk 4 you can still ski but slopes steeper than 30 degrees become more of an issue. You also have a greater chance of remote triggering. That is passing below a slope causes a weak layer collapse that propagates up the slope and triggers the slide. We’ve seen a lot of remote triggering of slides this winter. If you are route planning knowing which slopes are above 30 degrees can be very useful. Special rulers are sold by mountaineering shops to quickly measure the slope angles on topographical maps with contour lines. You simply have to draw in your route and run along it with the the ruler. Of course remote triggering means you need to check surrounding slopes as well.

There are some tools which can help with the task although their accuracy depends on the input data. For French IGN maps we can use http://www.skitrack.fr. For Switzerland the SwissMap application (49CHF/year) gives the same information.

Lets say we want to ski the Grand Rocher route in the Belledonne range. This is a traditional route for residents of Grenoble and Chambery when the avalanche risk is high. We can either create our own GPX route using a tool such as http://visugpx.fr/ or download one from one of the ski networking websites. In this case we’ll use skitour.fr

Here is the route

there are two GPX associated. They were recorded on the ground so it is worth checking that they take the standard route and not more “exotic” slopes. Right click on: Ce fichier » Télécharger to copy the link then go to skitrack.fr and paste it into the little box at the top and click the button “GPX Visu”. Here is a link

If we select (Pente > 30) We can see the route (in purple) has no slopes above 30 degrees and none of the slopes above the route exceed this angle. Excluding rare wet snow slides that can occur on slopes as low as 10 degrees (but during thaws) this route is pretty safe at all risk levels. It is quite fun to ski as well. However we can see the “exotic” slopes down to the Grand Marias and les Violettes have sections over 30 degrees and indeed there have been skier triggered avalanches here. 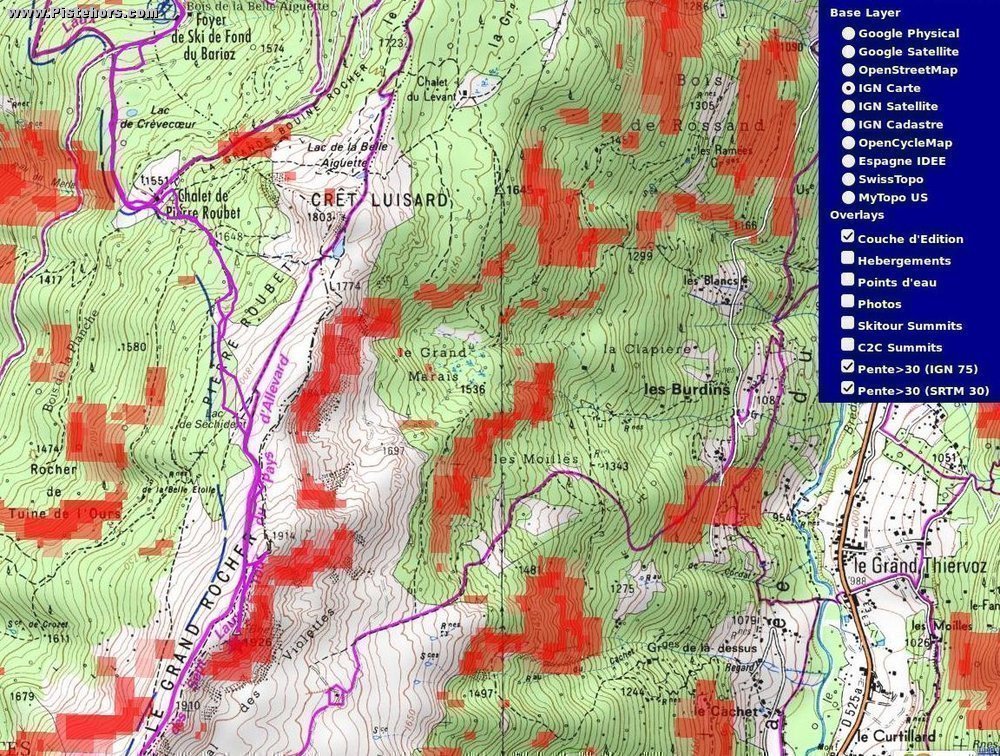 Another big favourite of local skiers is Chamchaude. At just 20 minutes from Grenoble is is skied morning, noon and night and is possibly the most toured route in the world. It is an altogether different beast

It is a sea of red except for the lower ski runs and the upper plateau. It is not for nothing that there is extensive avalanche protection on the slope below the summit. In the last couple of seasons there have been avalanches at the level of la Folatiere (a small mushroom shaped rock like a dolmen). This is somewhere where at risk 4, group spacing would be essential between the Bachassons cabin and the traverse to the safer summit plateau and where you would want to descend by the same route rather than the steep “direct” to la Folatiere. 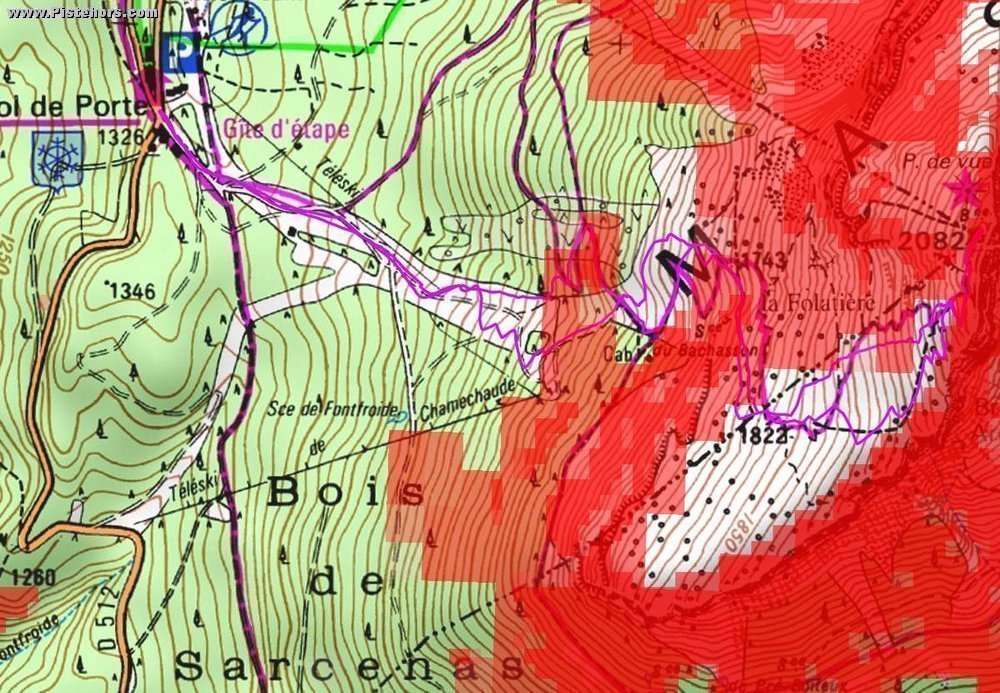 Skitrack.fr is only as good as the input data which is fairly coarse at the moment. Small sections of 30 degrees are not shown. For a slope to slide you only need a small area at this steepness, say a convex rollover, to start an avalanche. However if the rest of the slope is lower angled the avalanche won’t go far. Be aware of these limitations if you use this tool.

What of remote triggering? Terrain traps, How far will an avalanche run?

Terrain traps can be small features that are not shown on even a 1:25,000 series topo map or they can be larger features such as depressions or valleys. We can route around the latter in the planning stage. We are also concerned as to how far an avalanche can run. On risk 4 days we can assume large avalanches. Will it fill the entire valley, take us over feature such as cliffs? How much room do we have to give slopes that dominate the route. Sometimes you can simply use common sense. The big glacial alpine valleys, dominated by huge slopes in the 30-50 degree range, are not places to be in these kind of conditions. 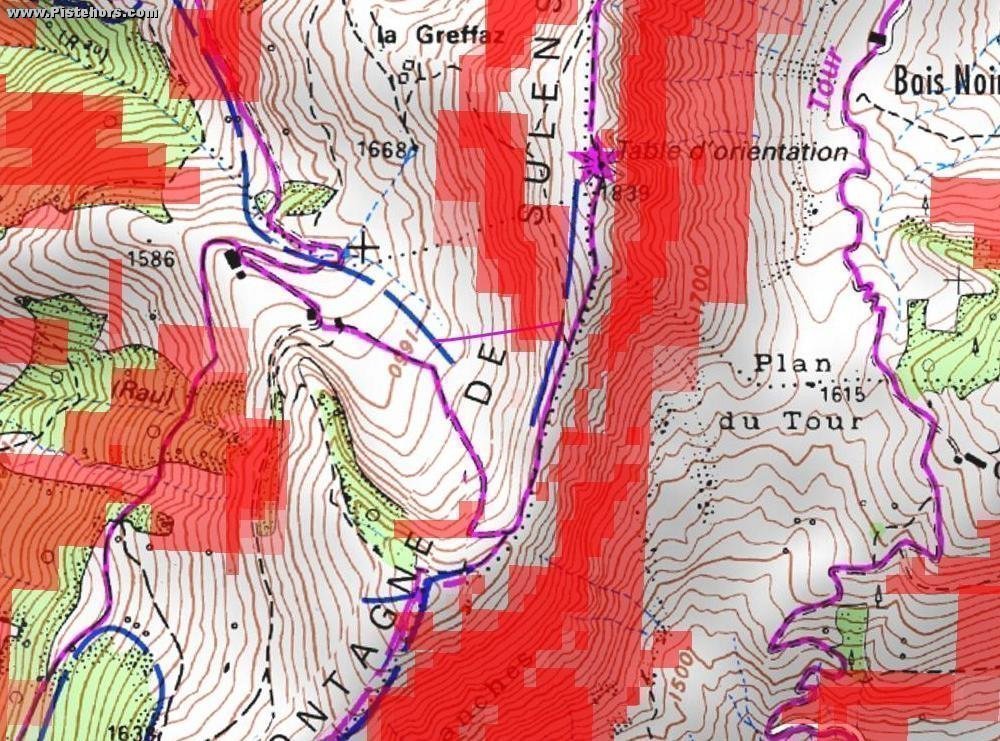 Avalanche researchers talk about Alpha and Beta angles. The Alpha angle is measured from the starting point of the slide (the Crown) to tip of the debris. The Beta angle is the point where the slope first reaches 10 degrees and begins to decelerate. There is a statistical relationship between these figures. If you know the Beta angle you can calculate the Alpha angle using data for the mountain range and so calculate how far a large avalanche will run. This is useful for planning where to route a highway when considering rare, large avalanches.

There is a range of data for Alpha or run angles depending on the mountain range but figures in the 19 to 28 degree range are typically quoted with some avalanches running as far as 15 degrees - this may be on the opposite bank of a valley! However it would seem that 20 degrees is a starting point for backcountry travel. If we take the Sullens avalanche that caught two snow shoers last winter, killing one and plot the avalanche path we see that it falls 95 meters for a run of about 240 meters. A 21.5 degree alpha angle to the blue “ski touring” line on the map. The group that were caught were more like at 25 degrees. Certainly too close for comfort. Again the Sullens route is considered “safe” during high risk days.

This information is not so easy to apply. Short of someone building an automatic tool calculating the run outs for all the slopes that dominate your path it a huge task. Better to avoid suspect terrain on High or Considerable days except where it concerns only a small section of the climb or descent and you can then take appropriate decisions: route around, ski one by one etc.

Remember that fatal avalanches can occur at Risk 2 and even Risk 1 so they should not be ignored. The devil is in the details of the avalanche bulletin and the conditions you find on the ground. Science can tell us the conditions where avalanches are likely, they can't say if a particular slope will slide at a given time.

http://www.avalanche-blog.com/item/11/ - a critique of alpha angles for ski tourers
http://pistehors.com/news/ski/comments/1060-avalanche-in-the-haute-savoie/ 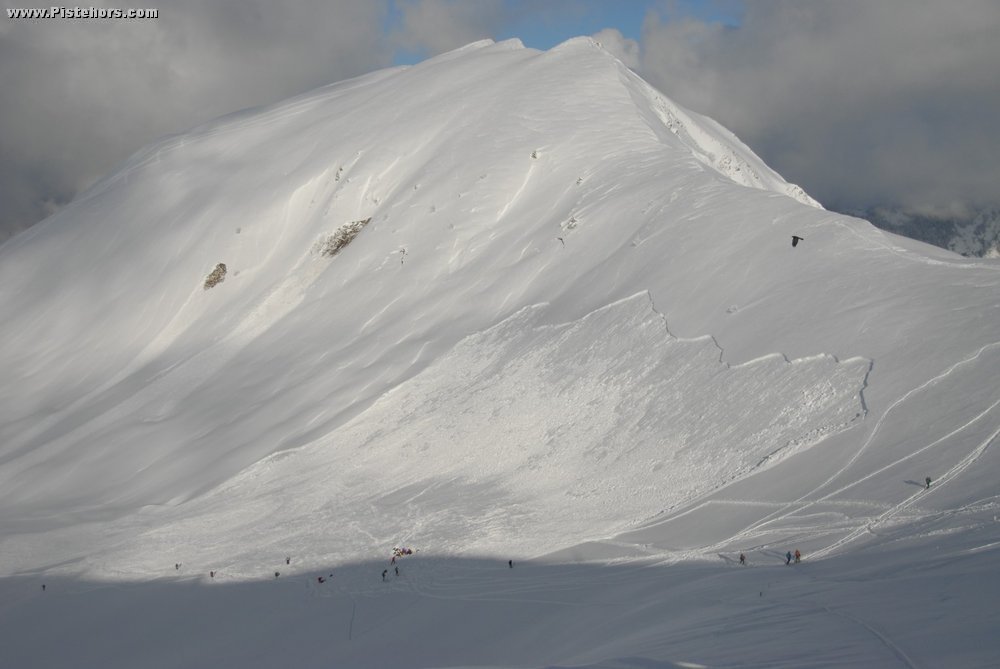