Skier killed in the Cosmiques Couloir

A skier has been killed in the Cosmiques couloir today around 11h00. The man, who lived in the Grenoble area, lost his grip on ice and fell 500 meters. The couloir had a goulotte (ice band) in the middle. The couloir is reached on the west (Bossons) side of the Aiguille du Midi. It often requires roping up to reach the skiing. News of the accident has shaken members of the elite ski mountaineering fraternity in Grenoble who knew the victim well.

The Cosmiques was first skied on the 22nd of May 1977 by the team of B. Delafosse and J.P Mansart. The couloir is rated 5.1, a sustained 45 degrees with sections over 50 degrees. Depending on condition it can require an abseil at mid-slope. The couloir, only attempted by elite skiers, has been the scene of a number of accidents over the years. In 2004 Jean-Claude Mosca, a retired instructor with the Military mountaineering school in Chamonix, died while skiing with his son. Mosca had lost a ski and fell while trying to refit it. An exceptional mountaineer, in 1971 he became the first man to climb solo the Walker

There is a tribute post to Mat (AKrocket38) on the Skipass.com forum where we all followed his adventures in the mountains with great interest… 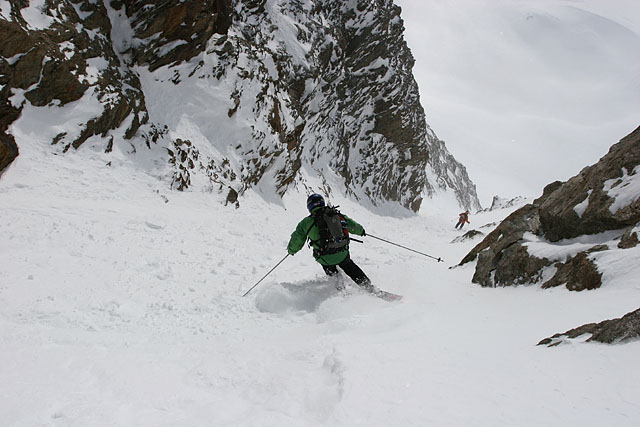 There are some moving and eloquent passages written on the Skipass site. Obviously a highly talented and highly respected young skier.
My condolences and heartfelt sympathy to all who knew and were close to him.
Gram S.