Worst snow in living memory according to Meteo France

Following an exceptionally hot start to April Meteo France has said that French mountain ranges have the worst snow cover ever recorded for the period. Snow depths are 40% to 80% less than normal although this is less marked at altitude. 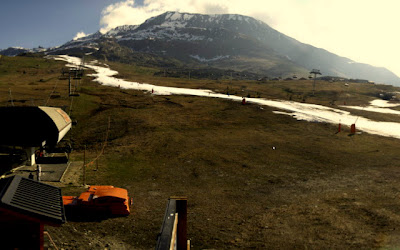 A ribbon runs through it

On northern slopes it is only possible to ski from 1700 meters altitude but you have to climb to 2300 to 2500 meters to find snow on southern slopes.

On the 9th of April temperatures at Chamonix (1050 meters) were 26.4°C, the hottest April day since records began in 1951 and it was 28.6°C in Bourg St Maurice at 870m with the zero isotherm above 4000m. This follows record breaking temperatures in both January and February. The average temperature at the Snow Research Center at the Col de Porte (1325m) in the Chartreuse for the first ten days of the month was the hottest since 1961. 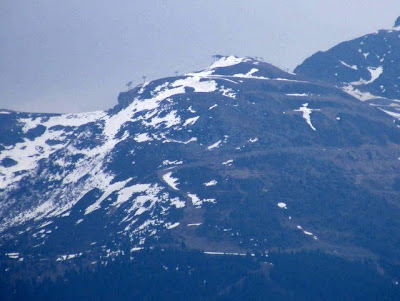 The Southern Alps had a winter that was close to normal, even above average in some areas but the April heatwave has taken its toll with levels 40 to 60% less than normal. Only the border with Italy and the Maritime Alps are close to normal.

In the Pyrenees the start of April was the hottest since 1882 at the observatory on the Pic du Midi de Bigorre (2900m) with the consequence that there is now almost no snow below 1900m. At altitude there is still cover but it is amongst the lowest levels recorded over the pas two decades. Only the eastern part of the range, which benefitted from abundant snowfall in March, has snow cover close to normal at 2400m.

On the positive side many high mountain cols are now almost snow free on their southern sides and some could open before the end of the month with relatively little clearance work needed by the highways department. Ski tourers will have to hurry though to ski the last of the 2011 vintage.

It really is depressing. Had my fewest ski days since 1991 when I broke my leg on day 1… I’ve already been hiking (as in summer hiking, yes) above 2000m in the chablais this year. Crazy