Discovering the secrets of snow

One of the big variables when starting ski or snowboard touring or going off marked and open ski runs is the snow. Is it safe? Will the conditions be skiable? Many, quite reasonably, leave such decisions to a guide or instructor so they can focus on the pleasure of riding acres of powder or gliding perfect spring snow. 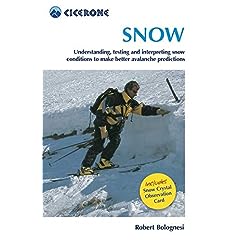 It is the ambition of many backcountry enthusiasts to be truly independent or at least to be able to participate as equals in conversations with their guide. There are plenty of good, detailed books available, the kind you can take to the beach in the summer and dream of snow. What has been lacking is a pocket sized introduction to snow and avalanches. Something you could slip into your coat and take with you on a tour.

Cicerone have just published “Snow: Understanding, Testing And Interpreting Snow Conditions to Make Better Avalanche Predictions ” and “Avalanche!: Assess And Reduce Risks from Avalanches” written by Swiss based avalanche expert Robert Bolognesi and translated by Blyth Wright. Snow tells you everything you wanted to know about the wonderful white stuff. How it forms, how it changes under the influence of temperature, wind and time. It then shows you some ways of assessing the stability of slopes to be crossed or skied.

We have previously come across this book in its French version and we were extremely impressed by Blyth Wright’s translation which reads every bit as well as Bolognes’s original text. This no paid by the word translation factory job but a fluid reworking by someone obviously extremely knowledgable about the mountain environment. Highlights are the excellent photographs of crystals, the snow metamorphism chart on page 19 and some detailed information on creating and interpreting snow pits. The glossary could maybe have been extended to include the crystal types but in such a short book, less than 60 pages, the information is not exactly hidden. The stability tests are also less practical for the ski tourer, including the “sliding or rutsch block” but not including some of the quicker tests covered in Bruce Tremper’s Staying Alive in Avalanche Terrain.

Snow is obviously designed to be used in the field. As well as the small format it comes in a durable plastic fly-leaf and includes a snow crystal observation chart and blank snow profile chart to photocopy. You will just have to add a magnifier and you will be on your way to becoming a snow expert.